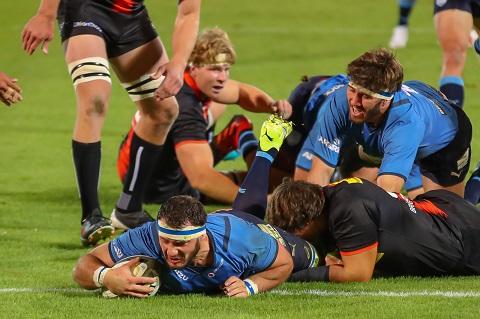 Marcell Coetzee of the Blue Bulls scores his try during the PRO14 Rainbow Cup SA match between against the Stormers at Loftus Versfeld on June 04, 2021.
Image: Gordon Arons/Gallo Images

Springbok coach Jacques Nienaber faces a nervous wait over the fitness of talismanic No.8 Duane Vermeulen and scrumhalf Herschel Jantjies, who left the pitch early in the Rainbow Cup SA clash between the Bulls and the Stormers at Loftus.

The Bulls registered a bonus-point 31-27 win over the stubborn Stormers on Friday night to maintain their place at the top of the standings and stay on course to qualify for the final.

SA Rugby will announce the squad for the two Tests against Georgia next month and the British and Irish Lions series and coach Nienaber and Director of Rugby Rassie Erasmus will be hoping that Vermeulen and Jantjies’s injuries are not serious.

Shortly after he walked off the field, Vermeulen was seen with an ice pack on his ankle while halfback Jantjies walked straight down the tunnel for further assessments and the extent of their injuries were not immediately communicated.

The Stormers led 17-7 at half time following two tries by Damian Willemse and Edwill van der Merwe with Tim Swiel scoring two conversions and one penalty.

The Bulls, who fought gallantly until the dying minutes of the match, scored one try in the first half by debutant Marcel Coetzee, converted by veteran kicker Morné Steyn.

In the second half the Stormers scored two unconverted tries from Tim Swiel and the second of the night by Van der Merwe as they threatened to take control of the proceedings.

The Bulls scored three more tries from Johan Grobbelaar, who registered a brace of his own, and the match was secured in the dying minutes by Ruan Nortje to ensure the bonus points.

The Springbok Women will take on France in the opening match of the 2022 Rugby World Cup at Eden Park in Auckland‚ New Zealand on October 8‚ 2022.
Sport
8 months ago

Injured Rugby World Cup-winners Lood de Jager‚ RG Snyman and Warrick Gelant are still in the running for selection for the series against the British ...
Sport
8 months ago

The wave of returning veterans washing up on these shores is gaining momentum and the latest arrivals will do so in Cape Town in the form of Western ...
Sport
8 months ago
Next Article