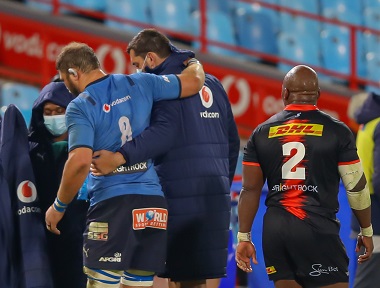 Duane Vermeulen (right) of the Vodacom Blue Bulls being helped off the field after picking up an injury during the PRO14 Rainbow Cup SA match against the Stormers at Loftus Versfeld on Friday, June 4, 2021.
Image: Gordon Arons/Gallo Images

Bulls captain and talismanic Springbok No.8 Duane Vermeulen is a serious injury concern for national coach Jacques Nienaber ahead of the hugely-anticipated British and Irish Lions series next month.

The 34-year-old Vermeulen limped off the field in the first half of Friday’s Rainbow Cup SA clash against the Stormers at Loftus on Friday with what appeared to be a serious ankle injury.

The Bulls registered a bonus-point 31-27 win over the Stormers with a late try by Ruan Nortje to maintain their place at the top of the standings and enhance their chances of reaching the final.

“It doesn’t look too good, I must say,” was the worrying assessment of Bulls coach Jake White after the match.

“I mean, he is a tough guy and for him to say he wants to come off is not ideal, but obviously we know that when he says it is sore then it means something. He said he was feeling a bit sore, he did hurt it [the ankle] but it is a different injury to what he suffered a couple of weeks ago.

“I am hoping for good news for his sake because he has ambitions of being involved with the Springboks by being selected on Saturday night and then playing against the British and Irish Lions. I am hoping for his sake that it was just a minor twist to his ankle.”

The other player who walked off the field in the opening stages of the match was Stormers and Springbok scrumhalf Herschel Jantjies.

Springbok coach Jacques Nienaber faces a nervous wait over the fitness of talismanic No.8 Duane Vermeulen and scrumhalf Herschel Jantjies.
Sport
7 months ago

“He was ill before the game — in fact we had to test him before the game, we just didn’t have another scrumhalf. He is quite ill,” Stormers coach John Dobson said.

White admitted that the Bulls made the win difficult for themselves by leaving things so late.

“I aged a bit during the match — you obviously don’t want to win games like that, but in saying that I am really, really proud that they stuck at it,” he said.

“I think there were a lot of opportunities, there was a disallowed try and at one stage we had made only 20 tackles and they had made something like 120 in the first half.

“We made it hard for ourselves but I said it before the game that the Stormers are a good side with lots of Springboks all over the field, and with a coaching staff who have been together for about six years. A lot of them coached those players at junior level.

“I always knew it was going to be a tough battle but I am chuffed that we got the result.”

Dobson expressed his disappointment at losing at the death.

“I think we did play with some character but it is pretty much a heartbroken change room. I am disappointed that we didn’t close it out — we had a scrum there where we should have closed it out.

“I don’t know what the penalty count was at the end but we wanted to have more of the ball and we talked the whole week about penalties in the middle third of the field.

“I think people are seeing the signs of what we are trying to do on the attack, I don’t think we were at our territorial best and we made a lot of tackles which shows a lot of character up here at altitude.”

Bulls coach Jake White has welcomed back three Springbok players from injury as he preparers for his side's Rainbow Cup SA clash against the Stormers ...
Sport
7 months ago

Rainbow Cup SA was in danger of becoming a procession for the Bulls before the Lions picked themselves off the canvass and delivered a blow that ...
Sport
8 months ago

Geographically not much separate these teams but there of late has been a gulf in performance, results and as a consequence where the Lions and Bulls ...
Sport
8 months ago
Next Article