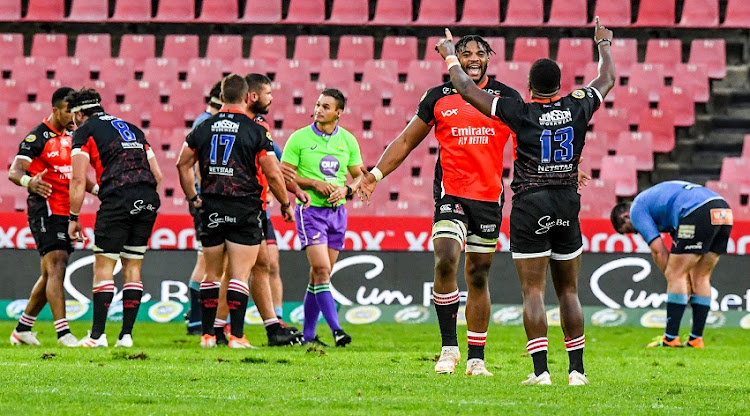 Defence coach Joey Mongalo of the Lions reacts to his team"™s win during the PRO14 Rainbow Cup SA match between Emirates Lions and Vodacom Bulls at Emirates Airline Park on May 22, 2021 in Johannesburg, South Africa.
Image: Sydney Seshibedi/Gallo Images

Geographically not much separate these teams but there of late has been a gulf in performance, results and as a consequence where the Lions and Bulls rank in the general estimation.

However, the Lions who have been on a slow, almost imperceptible simmer in recent weeks, finally boiled over and inflicted on their illustrious visitors their first defeat of the campaign to potentially throw the competition open.

The Bulls' defence and their ability to soak up pressure coupled with their knack of playing the big moments with composure and clarity of thought have been valuable allies this season and some of those hallmarks were at play here again.

After 55 minutes however it looked like the Bulls would maintain their authority after they were compelled to quell an initial insurrection.

Tries by Chris Smith and David Kriel looked to have decisively tilted the match in the Bulls favour but the Lions played with courage and great resolve to reel in the visitors.

The Lions however ended the match as they started it, with verve and vigour, grabbing the lead with five minutes to go when Fred Zeilinga tellingly touched down near the uprights.

It were the Lions however who made the more energised start, putting the ball through the phases while exploiting their width of the field.

Burger Odendaal darting into space and committing defenders was a regular occurrence, Carlo Sadie proved an immovable object in the scrums, Vincent Tshituka spread his influence equally in defence and attack, while Jordan Hendrikse ticked the boxes flyhalves ought to.

While the Lions could not be faulted for their first half graft they did at times complicate matters for themselves.

They had hit the rucks with great ferocity and were generally able to shift the Bulls in contact but small errors served to undermine their effort.

A charge down invited pressure they could have done without and they would have been disappointed the Bulls were level after 17 minutes.

Earlier their graft paid off when lock Ruben Schoeman barged over for a converted try after sustained pressure but the Bulls were level 10 minutes later after Elrigh Louw banged his way over.

That the Lions meant business was perhaps evident in the stat that Schoeman's try was just the second the Bulls had conceded thus far in the tournament.

On a few occasions in the first half they were on the back foot but managed to keep cool heads to ride the storm.

When the Bulls played themselves into positions of promise they called on their maul to turn the screw, while their contestable kicks earned them field position and possession from which to launch.

One such kick was followed up by a thumping tackle from Duane Vermeulen and from the ensuing turnover the ball was whipped wide to Madosh Tambwe who jumped clear of EW Viljoen's feeble tackle. Viljoen, generally, had an afternoon to forget.

That handed the Bulls a two-point lead just ahead of the break but Hendrikse, who saw a similar long range effort earlier drift wide, raised the flags with aplomb from inside his own half and on the angle.

The Bulls dominated much of the second half with Vermeulen cutting a towering figure in contact, while Tambwe's ability to evade it again impressed.

Smith's tactical kicking also heaped pressure in the Lions but it was the home team who this time held their nerve.