Stormers coach John Dobson after defeat to the Sharks: 'It was our own fault' 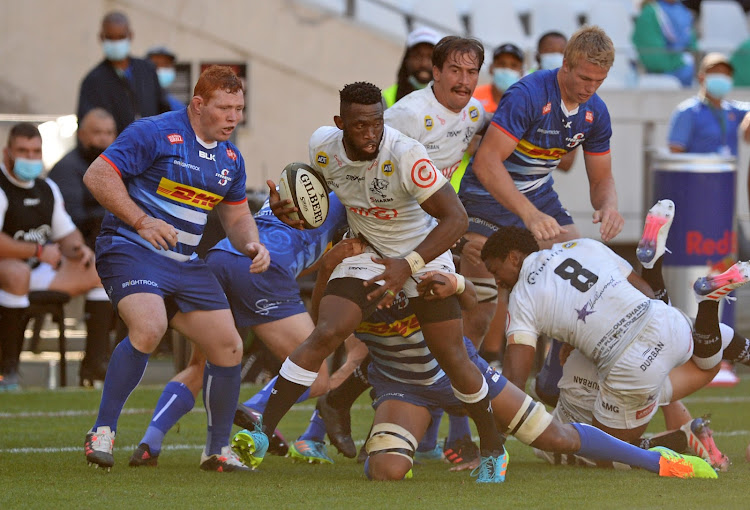 Springbok captain Siya Kolisi ended on the victorious side as his new team the Cell C Sharks beat his former employers the DHL Stormers at Cape Town Stadium in Cape Town on May 1 2021.
Image: Ryan Wilkisky/BackpagePix

After their initial toil‚ the Stormers seemingly got into the spirit of May Day in their clash against the Sharks at Cape Town Stadium on Saturday.

In their opening Rainbow Cup SA clash the only colour of consequence was red‚ as in the card brandished at Seabelo Senatla and Willie Engelbrecht (for two yellows).

While Senatla under the new laws could not return‚ he was allowed to be replaced after 20 minutes and it at least enabled the Stormers to regroup and show the kind of resolve that helped them stay in the contest.

In fact they came within a whisker of snatching victory in the last move of the match but Ruhan Nel mistimed his lunge at the bouncing ball in goal.

The Sharks scored 26 unanswered points either side of the break to wrest the lead that didn't appear theirs to take on the evidence of the first quarter.

The Stormers dominated the collisions‚ the line-out and as a consequence the penalty count.

They looked well on their way before Senatla carelessly brought a dramatic shift in the trajectory of Aphelele Fassi's aerial endeavour.

It was an action that also inexorably altered the course of proceedings.

“We were unlucky to lose it. It was our own fault‚” reflected Stormers coach John Dobson after the 30-33 defeat.

He lamented his side's discipline.

“It was woeful. I don't think we've had a red card before‚ so to get two in one game is remarkable. It cost us massively‚” conceded the coach.

“We let ourselves down with our discipline. Real character was shown towards the end though‚” captain Steven Kitshoff said as he picked what was salvageable from the wreckage.

As much as the Stormers will reflect on what could have been‚ the Sharks too will have cause for an inquest into their performance‚ particularly before they got thrown a lifeline.

They looked a well beaten side early on‚ but they too dug deep and called on their bloody-mindedness in defence and ability to transition‚ especially from deep‚ to sting the Stormers.

They are impressive in full flight.

“We are obviously not happy with that performance but we will take that result‚” said coach Sean Everitt.

“That is the result of a happy team when you don't play well but you still get the result.”

He lauded his team's effort in the last 20 minutes as the Stormers found renewed energy.

“The guys did well at the end to prevent the Stormers to score from their driving mauls.

"We have a lot to work on. We battled in our set piece‚ especially the line-out and we gave away penalties‚” said the coach.

The result was a significant one for Springbok captain Siya Kolisi‚ who went up against his former teammates for the first time since relocating to Durban.

Kolisi‚ in the colours of the Sharks‚ is a work in progress and his team will perhaps have to review how they go about the breakdowns.

“We are happy with where he is‚” said Everitt.

“He's still becoming comfortable with how we play and move the ball. He is certainly making inroads and has improved since he arrived.”

Both camps will have much to review after a typically bruising derby clash.

The Stormers' most immediate concern will be how they rearrange their resources after flyhalf Kade Wolhuter suffered what Dobson described as “a pretty consequential knee injury”.

The full extent of the injury is yet to reveal itself but he is likely to be sidelined for some time.

Others too will need medical attention‚ albeit less urgent.

The Rainbow Cup south opener was a busy affair and the match officials will also have material to peruse‚ especially around the experimental laws.

The so-called captain's referral‚ in which a team skipper can ask for an incident to be reviewed‚ added an interesting dimension but the process is going to need some tidying up.

While referees review footage on the big screen‚ they really don't need the unedifying sight and sound of players and assistant coaches loudly sharing their interpretation of what had just unfolded.