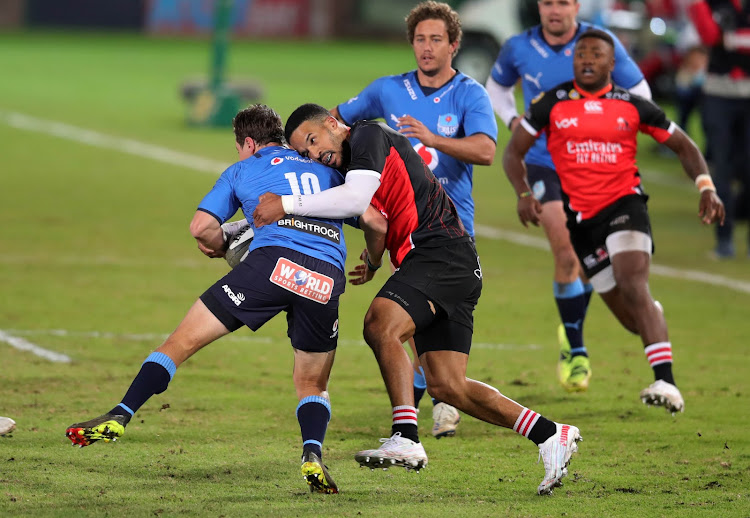 Chris Smith, who is tackled by Courtnall Skosan, scored one of the three unanswered tries as the Vodacom Bulls beat the Emirates Lions at Loftus.
Image: Samuel Shivambu/BackpagePix

The Bulls were scrappy at times during their 22-9 win over the Lions on Saturday at Loftus‚ but coach Jake White was happy to start the Rainbow Cup SA competition with a positive result.

The Pretoria side scored three unanswered tries from Chris Smith‚ Zak Burger and Elrigh Louw to stretch their impressive winning run at Loftus to 12 matches‚ a run that dates back from the Currie Cup and Super Rugby Unlocked campaigns.

“Happy with the win despite the performance‚ it is exactly that‚” he said.

“I told the guys that sometimes you have to win these sorts of games‚ but credit must go to the Lions because I thought they played with a lot of emotion.

"They were really good at the breakdown and they tried hard to slow the ball down.

“In the first half we had 21 minutes with the ball in play and the average on the Currie Cup was 27 minutes for the whole game.

"This means we literally played the whole game of rugby in the first half‚ which shows how difficult it was for us.

"There were a couple of try opportunities we should have taken‚ but you would know that if you play at this level you have to find ways to win.

"I am proud that at least we found the way to win the game.”

The Bulls travel to Cape Town to face the Stormers‚ who lost their opening match to the Sharks‚ in their next match and White is expecting an improved performance from his charges as the completion gains momentum.

“The interesting thing is that we started so well by keeping the ball for about three and half minutes and went on to score.

"I think we probably got seduced a little bit because we looked like [we were] at training ground where we kept the ball.

“But then again‚ that is part of coaching and growing as a team. Sometimes we must be a little bit smarter if they sent too many people in the front line.

"That is something we will work on and it is interesting that we played into the wind in the first half and we played with the wind the second half.

"I told them at half time that we must put them in the corner because we will be playing with the wind‚ but the wind turned the other way.”