Bulls off the mark with victory against Lions at Loftus 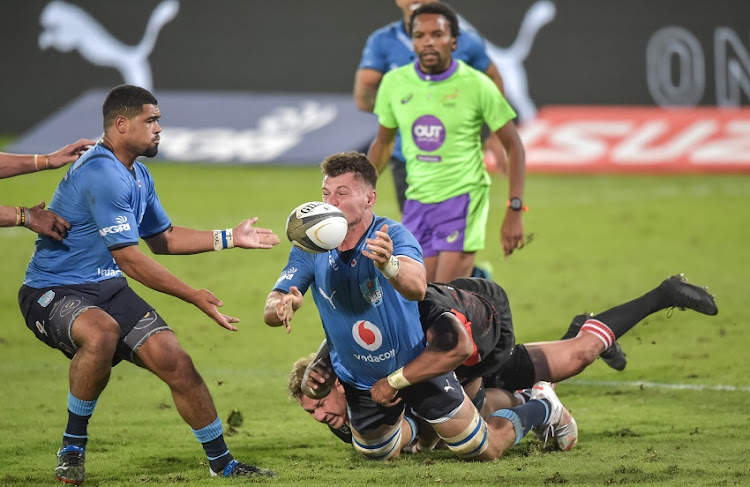 lrigh Louw of the Vodacom Bulls during the PRO14 Rainbow Cup SA match between Vodacom Bulls and Emirates Lions at Loftus Versfeld Stadium on May 01, 2021 in Pretoria, South Africa.
Image: Christiaan Kotze/Gallo Images

The Bulls began their Rainbow Cup SA campaign with a lively 22-9 win over the Lions at Loftus on Saturday night.

The Bulls registered this win through tries from Chris Smith, Zak Burger and Elrigh Louw while their visitors failed to touch down on the night with their scores coming from three penalties from Fred Zeilinga.

The margin of victory could have been bigger for the Bulls if they were not denied three tries that could have helped them to a bonus point win but coach Jake White will be pleased with how his players performed on their first match of the season.

During the match, law variations of red card replacements, a captain’s challenge and goal-line drop-outs were put to use by referee Rasta Rasivhenge.

Both teams will seek improvements in their next outings next weekend where the Lions travel to the Sharks in Durban and the Bulls are also away to the Stormers in Cape Town.

Lions coach Ivan van Rooyen will be unhappy with the fact that they failed to score a try in the match and they only scored one penalty in the second half where they also had EW Viljoen in the sin bin.

The Bulls were the first on the scoreboard with through flyhalf Chris Smith who punished the sleepy Lions defence with the opening try of the match that he converted himself.

Lions came to within one point by the eighteenth minute after Fred Zeilinga successfully put away two penalties in quick succession as the Bulls were punished for poor discipline.

The Bulls pulled away and got their scoreboard into double figures with a penalty that was put away by Smith following illegal scrummaging by the Lions .

In the second half, Lions registered the first points of the second half through a penalty by Zeilinga as they narrowed the points gap to one with 35 minutes still left on the clock.

As they tried to claw their way back into the game, the Lions suffered a huge blow when they were reduced to 14 men just after the hour mark when Rasivhenge sent Viljoen to the sin bin for a deliberate knock-on.

It took about six minutes for the Bulls to make full use of their superior numbers on the field when Zak Burger received an offload from Lizo Gqoboka to touch down under the posts for Steyn to do the rest.

The Bulls secured the match with their third try of the night that was scored by Elrigh shortly before the hooter sounded.