Swanepoel kick after the hooter settles try-fest for the Lions 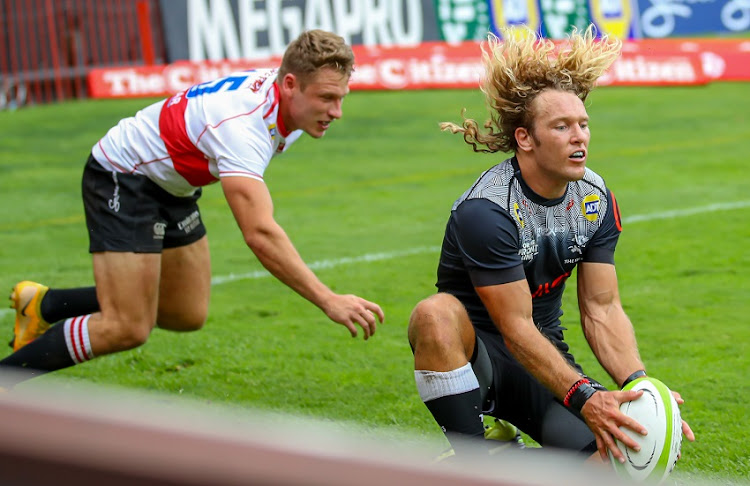 Werner Kok of the Cell C Sharks grabs up the loose ball before Tiaan Swanepoel of the Lions to score his try during the SA Rugby Preparation Series match between Emirates Lions and Cell C Sharks at Emirates Airline Park on March 20, 2021 in Johannesburg, South Africa.
Image: Gordon Arons/Gallo Images

The Lions did enough to squeeze out a good outcome from a 43-40 seesaw Preparation Series win against the Sharks at Ellis Park on Saturday that was only decided after the hooter had gone.

The match‚ which produced 12 tries‚ appeared destined for a draw but Tiaan Swanepoel put away a late penalty to win it for the home side.

Though there were plenty of tries across the afternoon‚ it must be said that most of the match was strewn with elementary mistakes as the coaches tried various combinations and gave opportunities to returning players.

The aim of this competition is to get the teams in shape for the upcoming Rainbow Cup with European teams expected to start next month‚ and players are getting the much-needed game time that is going to be crucial in the coming months.

At some stages‚ teams have lacked stability at scrum time and they have conceded too many penalties but the Sharks gave the Lions a run for their money as the encounter turned out to be a try-fest.

The first try of the match was registered by the home side when Ngia Selengbe touched down following a powerful scrimmage after four minutes‚ but the Lions’ lead was short-lived as the Sharks went ahead with Aphelele Fassi’s converted try.

The Lions retook the lead after 15 minutes through Swanepoel‚ who also stood up to convert his own try and they pulled further ahead five minutes later when Vincent Tshituka registered their third try of the afternoon.

After 23 minutes‚ the Sharks reduced the deficit to five points when former Springbok Sevens star Werner Kok used his pace to good effect to touch down at the corner after the Lions defence was caught flat-footed.

The Lions continued to dominate proceedings and they were rewarded with their fourth try of the match that was registered by Courtnal Skosan after the half-hour mark and was converted by Jantjies.

The first half also saw a good performance by the kickers with Swanepoel piercing the middle of the poles to convert his own try and Jantjies nailing the two that followed from Tshituka and Skosan.

It was the same for Sharks kicker Boeta Chamberlain who successfully converted their two first-half conversions as they chased the game.

After the break‚ the Sharks returned with more purpose in their work and it came as no surprise when they were rewarded with their third try of the afternoon from Dylan Richardson to narrow the gap to five points.

A few minutes later the Lions once again pulled away when Jan-Henning Campher scored their fifth of the afternoon with Swanepoel having an easy task of nailing the conversion.

Tries continued to rain at Ellis Park as Richardson registered his second of the afternoon‚ which was easily converted by substitute kicker Curwin Bosch.

The Lions responded with a try of their own from Wandisile Simelane that was converted by Jantjies just after the hour mark as they began to take control of the match.

But Ntuthuko Mchunu scored two quick tries that were converted by Bosch to level the match‚ and Simelane could have won the game at the death but fell short of the tryline with cramps.

The drama was not over as Swanepoel put away the late penalty after the hooter had gone to finally settle the encounter.