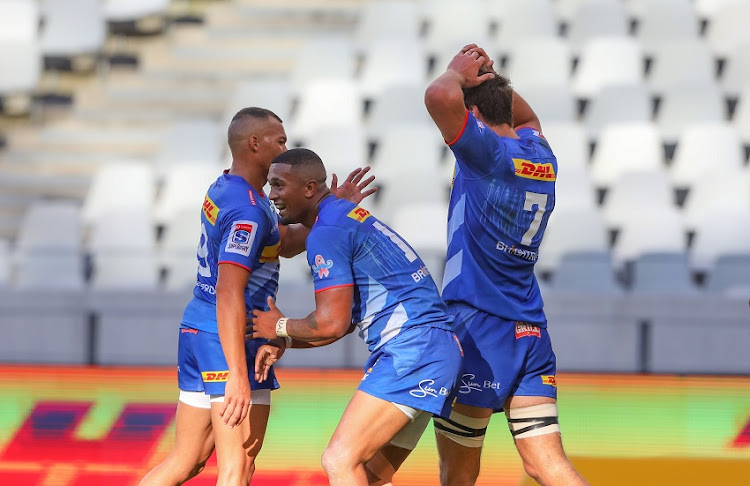 If the Stormers were in pursuit of improvement they found it in parts but they will go easy on the high fives and congratulatory back slaps after their 38-32 win.
Image: twitter/stormers

The Stormers lost their shape and almost their way against lowly Griquas in their preparation match in Kimberley on Tuesday.

If the Stormers were in pursuit of improvement they found it in parts but they will go easy on the high fives and congratulatory back slaps after their 38-32 win.

Their forwards laid the platform from which they could play themselves into a position of relative safety but as the game got more ragged and loose they lost their grip and almost the plot.

They faced some anxious moments to close out the game after leading 38-13 after 53 minutes.

A young Stormers team went down to the Cheetahs in their first match at their new home ground 10 days ago and although they responded well initially they again faded in the final quarter.

They weren't as ruthless as they could have been against the Cheetahs and although they scored five tries against Griquas they were again wasteful in attack.

Both sides played with attacking intent but often their accuracy let them down.

Passes were rushed and some decision making proved questionable as both teams at times blundered their way through the first half.

Even in the act of scoring a try on the stroke of half time the Stormers over complicated matters when right wing Sihle Njezula opted for the risky chicken wing pass to Sergeal Petersen. It wasn't the only time Njezula complicated things when the basics were called for.

Stormers scrumhalf Godlen Masimpla was active but not always effective in the first half, but it was he who got his team going when he stretched to get the ball over the line to hand them the early lead. Soon after however Griquas' veteran wing Ederies Arendse rounded off near the poles after some solid build up work from the hosts.

Although Griquas were game they lost touch with the visitors at the three quarter mark. Amid the franticness around him Ruhan Nel cut a calm and composed figure in the Stormers' midfield.

The same applied to Griquas captain George Whitehead but elementary errors kept undermining the home team. Masixole Banda's poorly executed attempted clearance early in the second half was another example of Griquas' propensity to aim at their feet.

That ill considered kick was charged down and led to a try for Marcel Theunissen which appeared to kill the game as contest.

However, as accuracy and clarity of thought abandoned the Stormers, Griquas grew an arm and a leg in the final quarter and almost snatched a most unlikely win.