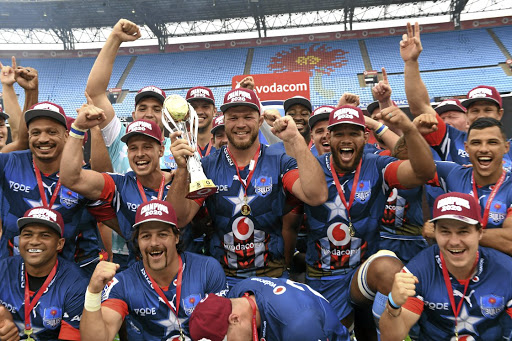 Affectionately known as 'Thor'‚ Bulls No 8 Duane Vermeulen‚ has nailed down the title of South African Player of the year for a second time.

He led the charge as the Bulls almost made a clean sweep at the annual SA Rugby awards that was announced electronically on Thursday.

The Bulls‚ champions of Super Rugby Unlocked and the Currie Cup‚ won in almost every category.

Vermeulen‚ who captained the Bulls to two titles‚ also won the Super Rugby Unlocked Player of the year award 2020.

Cornal Hendricks capped a brilliant season by being named Currie Cup Player of the year.

The Lions' Wandisile Simelane‚ was named Young Player of the year.

The former Junior Springbok star got his first taste of senior rugby in green and gold in the successful Springbok Showdown before going on to star for the Lions in the local competitions.

Stedman Gans‚ who made a successful transition from the Blitzboks to star for the Bulls after the World Rugby Sevens Series was cancelled‚ was named Springbok Sevens Player of the year.

The Blitzboks’ won two tournaments out of six to finish second overall on the standings.

Jaco Peyper‚ the long time to top referee in the country‚ was named the referee of the year.

“It was a very tough season but Duane was superb – not only on the field‚ where his performances were on par with the very high standard we’ve become accustomed to from him‚ but he also led the Vodacom Bulls with aplomb as our teams had to navigate numerous new curve balls and challenges‚” said Mark Alexander‚ president of SA Rugby.

“I would like to congratulate Jake and the Vodacom Bulls on their season‚ as well as Wandisile‚ Cornal‚ Stedman and Jaco‚ but I also have to acknowledge all our teams and players who worked tirelessly under difficult circumstances to ensure that we saw some rugby on local soil in 2020.”

Alexander recognised the difficult year players and administrators have had to endure.

“The pandemic has been disruptive to people from all walks of life and apart from the hard work done in training‚ first at home and later back at their team bases‚ it was heartening to see our players rolling up their sleeves and also helping fellow South Africans who are not as fortunate.

"We saw yet again that we are stronger‚ together.”

The winners and finalists for 2020 are:

Team of the Year: Bulls

Coach of the Year: Jake White

Referee of the Year: Jaco Peyper