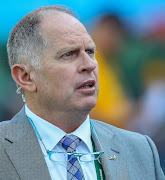 Despite being typecast as villain and the player the Newlands crowd liked to hate most‚ Naas Botha goes aflutter when he reminisces about the now-mothballed stadium.

While Botha is sad to see the poles he regularly bisected come out‚ he grudgingly accepts ‘it’s time to move on’.

He has reason to hold the ground in reverence. Apart from a decent winning record with the Blue Bulls and the Springboks‚ Botha’s career glowed with significant milestones celebrated in the shadow of Table Mountain.

“If I recall correctly I played my 100th and 150th games for the Blue Bulls at Newlands. I also captained the Bulls for the first time there. We won that one‚” he pointedly reminded.

It is his standing as a virtuoso match-winner that made him a despised‚ yet respected figure every time he ran out at Newlands.

He was seen as the ‘Nasty Booter’‚ a player whose modus operandi stood diametrically opposite to the beguiling‚ free spirited ways of the local heroes.

While the crowd’s boos generally served as a backhanded complement‚ Botha remembers two incidents that highlights some of the locals’ contempt.

“After one game a bloke‚ I think he was a preacher’s son‚ punched me in the stomach. On another occasion I was standing behind the poles waiting for Robbie Blair to kick when Freek Burger [a linesman that day] told me to stand still.

“Someone threw me with a brandy glass and it was one of those with the really heavy base. It hit my leg but it was nothing major.

“The good times at Newlands by far outweighs the few stupid things that happened there to me‚” Botha reasoned.

Besides‚ he was up for a challenge and back then they didn’t come bigger than the enduring north versus south rivalry.

“I had a win percentage of more than 50 percent at Newlands and that wasn’t bad‚” Botha insists.

Botha then gets a flashback. “Oh yes‚ I seem to recall one Tukkies versus Maties game we played there‚ that we won!”

Despite visiting Newlands between 1977 and 1992‚ Botha can only recall two matches in which he felt his game was not up to standard.

He was so poor in the 1992 Test the crowd actually started chanting “Theo‚ Theo ... ” to get Botha to hand over the kicking duties to fullback Theo van Rensburg. Abdicating kicking duties helped little.

Botha might have been punched in the gut once‚ but he had the habit of kicking WP in the teeth. With victory in sight for the home team his late drop goal tied the scores 15-all in the 1979 Currie Cup final.

“I always joke about three penalties Steve Strydom awarded us in that game. He gave us those penalties thinking there was no way I could kick it over on that field. You must remember Newlands back then was like Clifton Beach with a bit of grass. I banged them over.”

Botha only played five Tests at Newlands. To be fair only six were played at the ground from the time he made his debut to his international retirement.

“The only one I lost was the last one‚” he reminded.

“Everyone wanted to play a Test at Ellis Park and Loftus felt like home but there was something absolutely magical about playing at Newlands.

“In the morning you’d wake up in the Ambassador Hotel [overlooking the ocean from a cliff face in Bantry Bay] and the sun would be out. When you drive around the mountain then it rains in Newlands.

“I actually had a fun time at Newlands. It was always a great venue to play at. The crowd was almost on top of you.

“The supporters were knowledgeable and they were good. They liked their WP but the Bulls always had decent support. I can only speak fondly about Newlands.”