Youthful Bulls side mauled by the Pumas in Mbombela 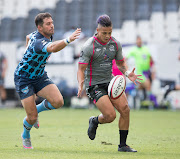 A young Blue Bulls side was mauled down 44-14 by the Pumas in their inconsequential Carling Currie Cup clash at Mbombela Stadium in Nelspruit on Sunday.

Jake White named a host of his Under-21 Bulls champions into combat for this final regular season encounter as he had one eye on the semi-final meeting against the Golden Lions at Loftus on Saturday.

The Pumas rang in six tries to the two from the visitors but the defeat for the Bulls had no bearing on the log table as they went into the clash already guaranteed of a home semi-final.

Winger Luther Obi crashed over for the Pumas opening try with fullback Devon Williams helping himself to a pair of try as the home side raced to a 24-0 lead after just 20 minutes.

Daniel Maartens, Willie Engelbrecht, and Etienne Taljaard also crashed over the line for the Pumas as they ended their season with a deserved win to finish second from bottom behind the winless Griquas and a place below the Free State Cheetahs in fifth place.

The Bulls finish top of the table despite the win and will now go home to prepare for a home semi-final clash against the Lions at Loftus while Western Province will be at home to the Sharks in the other semi-finals.

The final will be contested on January 30.