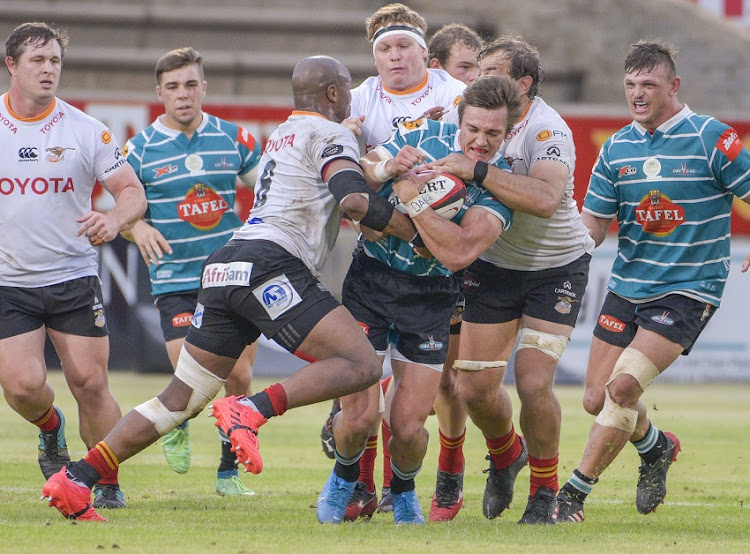 This was billed as the deadest of rubbers and it was soon evident in both teams' high error rate and general lack of application and conviction.

The team from Bloemfontein, many have predicted, has no rosy future, while Griquas may as well be at the bottom of the hole for which their city is famous.

They have at times been the noisy neighbours, but they went into this clash in search of their first Currie Cup win of the season.

The silly errors that stymied their progress for much of the campaign were again in evidence and Frans Steyn punished them.

The Cheetahs, who after their defeat to Western Province last week, was out of the running for a spot in the semifinals, were perhaps understandably a yard or so off their pace.

They never operated at full tilt but against the competition's cellar dwellers perhaps there was no reason to.

They quelled the early Griquas threat but they were hamstrung by early imprecision.

Steyn's cross kick in the 15th minute wasn't so much one that explored the width of the field as one made in anger. It was hoofed with such velocity if the stadium wasn't empty someone in Row F may have been in peril.

The Cheetahs however continued their territorial dominance and was eventually rewarded in the 20th minute when hooker Marnus van der Merwe's surging leg drive got him over the line.

Steyn banged over the conversion to hand the Cheetahs the initiative after the first quarter. Overzealous former Blitzbok Rosko Specman shot out defensive alignment two minutes later but Griquas eschewed the opportunity to go for goal. From the resultant line-out following a touch finding penalty Griquas earned another penalty which Tinus de Beer duly converted.

His side faced a four-point deficit at the break in a match in which fortunes fluctuated.

The Cheetahs had the breeze at their back after the resumption but it was the home side that looked to have the wind in their sails.

It were they who started the second half with a deeper sense of purpose and while the Cheetahs' defence stood firm initially, they had no answer to a Griquas line-out maul from five metres out. It fell to Gideon van der Merwe to barge over and it was just reward for a player who replicated the sterling form he showed against the Sharks a week earlier.

Three Steyn penalties in quick succession however got the Cheetahs back in front and they had some nervy moments after Griquas wing Daniel Kasende's converted try got his side within a point. Steyn added another penalty to stretch the visitors' winning margin.

Finishing fifth in the Currie Cup however would have been deeply unfulfilling for the Cheetahs.

They wanted to make a point as the yearn for the playing fields of Europe.

The Cheetahs who were part of the PRO14 along with the Southern Kings from 2017, have been excluded from this year's expanded tournament that will now feature former Super Rugby entities, the Bulls, the Lions, the Stormers and the Sharks.

It is not the end of the road for them insisted their managing director Harold Verster.

“We have made progress but I am in no position to announce anything,” he said when asked whether they had teed up playing opportunities outside of the Currie Cup next season. “They will make announcements at the end of February. That will be in conjunction with Pro16's announcements.”

Verster would not say who will make the 'announcements'.

“It is still in a planning phase. There are various things we are looking at. It is confidential and sensitive at the moment. I can't talk about it now otherwise the other parties may walk away. We can't reveal our cards until our ducks are in a row. I don't want to jeopardise anything at this stage.

“The Cheetahs will play, and they will play in good matches of that there is no doubt.

“We are not down and out. We are Freestaters. We look ahead our whole lives. We can't lie down because it is not in our DNA.”