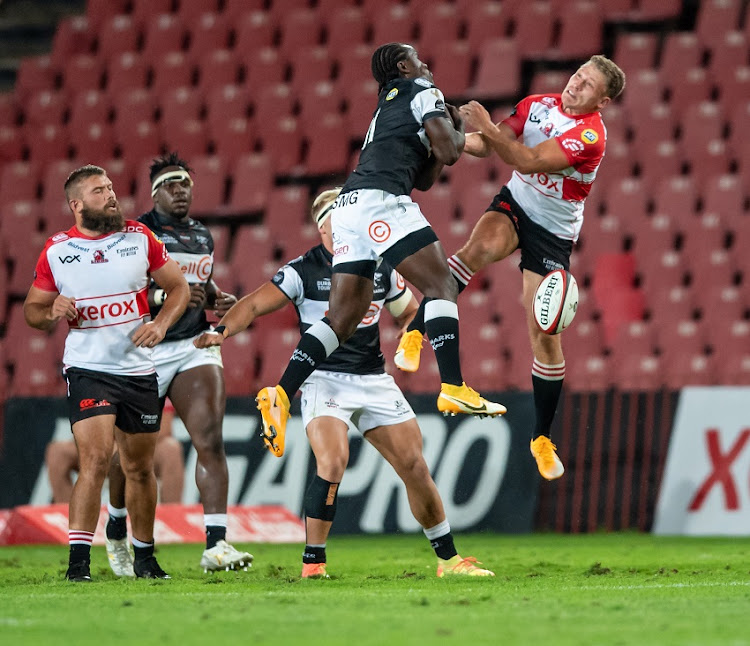 Yaw Penxe of the Cell C Sharks and Andre Warner of the XEROX Golden Lions in action during the Carling Currie Cup match between Xerox Lions and Cell C Sharks at the Emirates Airlines Park on December 19, 2020 in Johannesburg, South Africa.
Image: Anton Geyser/Gallo Images

Wing Courtnall Skosan and fullback Tiaan Swanepoel scored tries as the Lions claimed a deserved 27-12 victory over the Sharks in a scrappy Currie Cup clash at Ellis Park on Saturday.

Captain Elton Jantjies kicked three penalties and Swanepoel added two more as the Lions punished the ill-discipline of the visitors and move up to second in the table on 29 points, six behind the table-topping Bulls.

All of the Sharks’ points came via the boot of flyhalf Curwin Bosch as he kicked four penalties, but they will be disappointed with their lack of attacking threat with ball in hand, as well as a high penalty count against them.

The Sharks slip to third on the table with 28 points, but they have a game in hand over the teams ahead of them, with Western Province in fourth having collected two points fewer.

The Lions were able to put points on the board in the first passage of play as, after they fielded the kick-off, Elton Jantjies attempted to break the Sharks line and was held in the tackle, leading to a penalty he was able to convert himself. The Sharks burned an attacking line-out when the ball was thrown too long, while the Lions dominated the first scrum, forcing a penalty, as they showed some early ascendancy in the set-piece.

The scrum penalty for the Lions was repeated minutes later but this time they turned down a kickable penalty and opted for the line-out.

That ambition was rewarded when Skosan crossed in the corner as they moved the ball laterally through the phases and the Sharks ran out of defenders.

Bosch narrowed the deficit to five points when he kicked a monster 60-metre penalty that cleared the crossbar with ease and struck the inside of the post to put the visitors on the board.

He proved that was no fluke with a similar kick minutes later after the Sharks were penalised at the ruck.

The flow of the game was interrupted by a high penalty count for both sides and when the Lions were awarded another chance to kick for posts after lock Marvin Orie was taken out in the air, Swanepoel landed a long-range effort to add more points for the hosts.

Hands in the ruck from the Sharks led to another Jantjies penalty and the home side led 14-6 at halftime.

Bosch closed that gap early in the second period as the errors continued and he landed a penalty, but they met a red and white wall of defence as they failed to turn a wealth of possession into try-scoring opportunities.

And discipline continued to be a problem as Swanepoel landed a penalty awarded for offside, and Jantjies another for the same offense from the visitors.

The win was secured in the final 10 minutes when Lions centre Wandisile Simelane made a brilliant break through the Sharks line and fed Swanepoel for an easy try, a rare bit of quality on an otherwise error-strewn night on the Highveld.