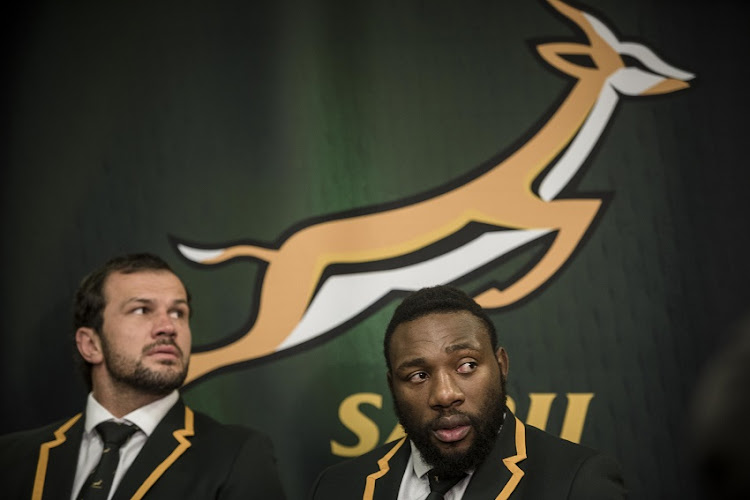 Bismarck du Plessis and Tendai Mtawarira of the Springboks during a media briefing as the team arrives from the Rugby World Cup in England on November 3, 2015 at the OR Tambo International Airport in Johannesburg, South Africa. South Africa finished as the third best team in the world after losing to world champions New Zealand in the semi-finals and then beating Argentina in the bronze final.
Image: Gallo Images / Beeld / Cornel van Heerden

Three South African players have been named in World Rugby 15’s Team of the Decade.

There was also special recognition for Siya Kolisi and his Springbok colleagues for their fundraising efforts through the #StrongerTogether for R32-12 campaign‚ which raised more than R1 million for hunger alleviation during the Covid-19 pandemic.

Instead of the traditional awards celebrating performances on the pitch in 2020‚ supporters had the opportunity to vote for their six favourite players and tries of the decade awards.

The Men’s Team of the Decade features three South African Rugby World Cup winners. Du Plessis and Habana were part of the team that won the trophy in Paris in 2007‚ while Mtawarira lifted it in Yokohama last year.

All three players were members of the Springboks’ 2-1 series win over the 2009 British & Irish Lions.

“On behalf of the entire South African rugby fraternity‚ I would like to congratulate all our Springboks who featured in the World Rugby Awards tonight‚” said Mark Alexander‚ President of SA Rugby.

“’Beast’‚ Bismarck and Bryan always gave everything they had for the Springbok jersey and were great ambassadors for our wonderful country. Their inclusion in the Team of the Decade is great reward for their consistently high level of performance in the green and gold.

New Zealand’s two-time Rugby World Cup-winning captain Richie McCaw was named World Rugby Men’s 15s Player of the Decade from a list of nominees made up of World Rugby's player of the year winners from 2010.

France full-back Jessy Trémoulière added another accolade to her Player of the Year award in 2018 by being voted the World Rugby Women’s 15s Player of the Decade.

A total of six nations are represented in the World Rugby Men’s 15s Team of the Decade‚ selected by the star-studded panel with seven players from New Zealand‚ three from South Africa‚ two from Ireland and one each from Australia‚ Italy and Wales. Interestingly‚ there are no Englishmen in the team.