Siya Kolisi heartbroken after WP suffer another defeat: 'That‚ honestly‚ breaks you' 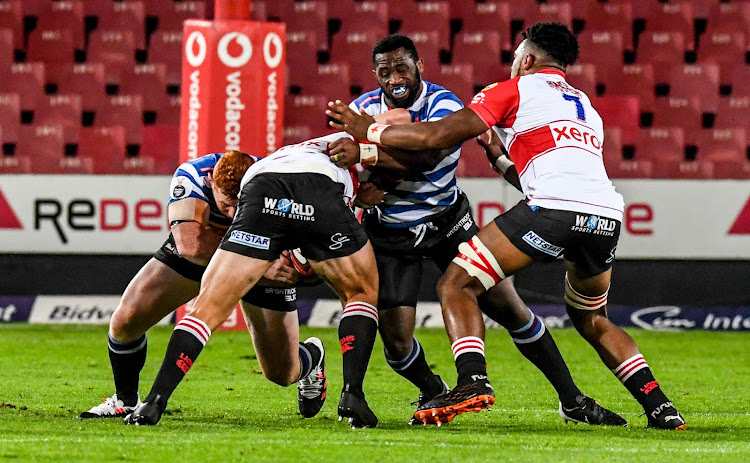 Tiaan Swanepoel of the Lions is tackled by Siya Kolisi and Steven Kitshoff of Western Province during the Carling Currie Cup match.
Image: Sydney Seshibedi/Gallo Images

Western Province coach John Dobson lamented a crippling injury list and incoherent decision making at the scrum following his team's 22-19 Currie Cup defeat at the hands of the Lions at Ellis Park.

The coach scrambled to plug the holes left by players who had to depart the scene because of injury‚ with replacement prop Neethling Fouche‚ who was hospitalised with concussion‚ headlining the severity of the knocks.

“Bongi (Mbonambi) got a knock‚ and I'm not sure what the diagnosis is. Neethling Fouche is in hospital with concussion. Salmaan Moerat is concussed. Trokkie Augustus is concussed and has a neck strain. Seabelo Senatla has done the MCL ligaments of his knee. I'm not sure what Scarra's (Ntubeni) condition is. We were reshuffling a little bit on the move. There are a couple of other knocks‚” sighed Dobson.

The coach was equally exasperated by rookie referee Griffin Colby's handling of the scrum. As expected Western Province had a clear advantage in that facet but they were penalised on three occasions despite the fact that it was their toes digging up the turf at Ellis Park.

“Our constant messaging in dealing with the match officials was about giving us a chance to scrum‚ which we felt we didn't really get last week (against the Blue Bulls). I don't know at what stage is it worth keeping the Steven Kitshoff's and Frans Malherbe's if the scrums are going to be.. I don't know....

“We will review it and go through a proper process. I don't think I have seen resets and penalties like that. We were really‚ really frustrated at scrum time. If people say Western Province shouldn't rely on the scrum‚ then other teams must build a scrum like we have. We need to consider whether we are doing the right thing if you can't get a reward for it.

“We gave away three scrum penalties‚ which is our season total in one game‚ when I felt we had a dominant scrum. It was a bit frustrating for us but I need to look at it properly.”

Captain Siya Kolisi explained his emotions – how it felt to let victory slip from their grasp the second week running. The Stormers were 19-9 up at one stage.

“It is horrible. I can't say it in words‚” said Kolisi who is still trying to recapture his best form.

“You work so hard for 60-70 minutes. Small things‚ like getting off the plan. Then they took advantage. We also created opportunities and didn't take them.

“Even if we didn't play as well as we wanted‚ we were still in control. Then you throw it away like that. That‚ honestly‚ breaks you.

“We have a game next week (they host the Pumas) and we will have to pick ourselves up. It is horrible to lose like that two weeks in a row.”

Dobson admitted his team has lost ground in their quest to host a semi-final.

“We are under a little bit more pressure. We will probably have to go to a place like Bloemfontein and win‚ which will be tough. Deservedly.