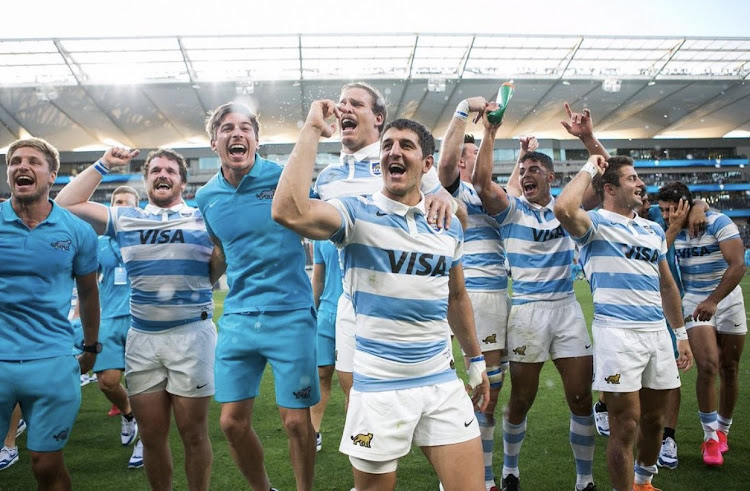 GAME ON Argentina players celebrate after beating the All Blacks in Sydney.
Image: Argentina Rugby Union/Twiter

Argentina's squad left Australia on Sunday full of pride in their remarkable Tri-Nations campaign and with their reputation as an international rugby power considerably enhanced.

The future of Argentine rugby, and for many of its players, remains uncertain, but the trip to Australia must rank alongside stunning run to the 2007 World Cup semi-finals in the annals of South American rugby.

The odds against success were considerable after months of training in lockdown at home, the shutdown of the Jaguares Super Rugby team that employed much of the squad, two lots of quarantine and no test action in more than a year.

The Pumas, however, beat three-times world champions New Zealand for the first time in their opening match and followed that with two draws against Australia. The only blot on their copy book was a 38-0 loss to the All Blacks.

"It's been an incredible journey the whole year," coach Mario Ledesma said after the 16-16 draw on Saturday which closed their short season.

"Adversity was present from March on, and then the Jaguares were gone, there was the economic crisis in Argentina and with the (union). The only possibility of coming (to Australia) was through quarantine in Uruguay and here.

This week, Ledesma said, had been the toughest of the tour after discriminatory comments posted by some team members on social media between 2011 and 2013 were unearthed.

Flanker Pablo Matera, lock Guido Petti and hooker Santiago Socino were stood down on Tuesday, with Matera stripped of the captaincy, but all were reinstated on Thursday in a u-turn by the Argentine Rugby Union (UAR) prompted by a player revolt.

"From the beginning we said we didn't want to make any excuses but this week has been hard," Ledesma said.

"All the other stuff, the preparations, all the build-up was happy days, but this week has been tough, especially on some of the boys, but these guys never stop surprising us.

"Pandemic style, I guess," he added, when asked how the Pumas got through it. "Just re-adapting and reinventing yourselves. But they were incredible, they never cease to amaze me."

Where the Argentines were once renowned for scrummaging power alone, the Pumas have forged a new reputation in Tri-Nations for aggressive defence.

How that progress is built on going forward is uncertain as the Jaguares have no money, no players and no competition to play, while at least 10 of the squad are without contracts for next year.

"At this point, who cares?" said a clearly exhausted Ledesma. "We've been through a lot this year and we deserve a few beers and then to head back to our families, who we've been missing a lot."