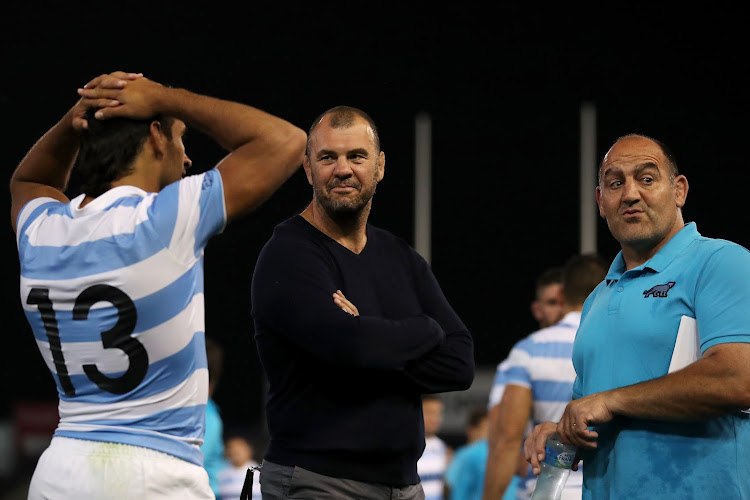 The two coaches showed starkly contrasting emotions after Australia and Argentina played out a 15-15 draw in the Tri-Nations on Saturday, which left everything to play for over the final two rounds of the competition.

Many feared that the annual southern hemisphere test championship would be a damp squib after being delayed by the COVID-19 pandemic and then shorn of the world champion Springboks over South African concerns about player welfare.

Argentina's first ever victory over the All Blacks in a stunning contest last week put paid to those fears and Saturday's match, while no classic, continued to build tension over who will end up as champions.

With the three teams now tied on six points, the Wallabies will have to watch on when the Pumas face the All Blacks again next week before they meet the Argentines back in Sydney the following Saturday.

Australia coach Dave Rennie was left frustrated by his team's inability to put the game away after leading 15-6 going into the final quarter of an hour and not securing a victory that would have brought the trophy within their grasp.

"It's a pretty even comp now, we've left the door open. Big game next week and we'll have a clearer idea of what we need to do by the time we play the Pumas again."

Argentina coach Mario Ledesma conceded that his team had not put in the same level of performance as last week in Sydney, but he continued to marvel at his players.

"The first thought is pride," he said. "They were trying to tire us out, and I thought it was working, but the boys just hung in there."

Ledesma thought the presence in the Pumas camp of former Wallabies coach Michael Cheika had not been a big factor in the match, although he was again full of praise for his friend's impact on the squad.

"He's been awesome," he added. "This last month he's just been incredible. Even this morning, he took some of the players who didn't make the (matchday) 23 out training.

"I don't think there was anything special this week -- Australia now has a new team in charge so anything he sees is from the outside."

Ledesma would not be drawn on how he will go about getting his players up to face the All Blacks and Australia again over the next two weeks after two such huge performances.

"We're going to recover tonight and think very carefully about how we go ahead," he said.