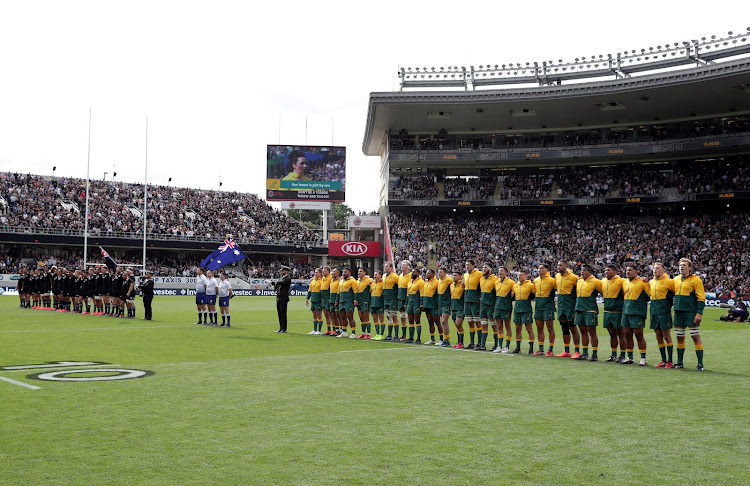 New Zealand and Australia line up for the National Anthems before the second Bledisloe Cup match in Auckland.
Image: AAP Image/David Rowland via REUTERS

Australia coach Dave Rennie was left ruing a cavalcade of errors that cost his side in their 27-7 loss to New Zealand in their second Bledisloe Cup Test at Eden Park on Sunday.

The Wallabies had come into the game riding a wave of enthusiasm and expectation from across the Tasman Sea after they held the All Blacks in a 16-16 draw in Wellington last week.

The home side, however, proved a much tougher proposition in Auckland on Sunday, and when Rennie was asked to try to sum up what the difference in the seven days was, he had just two words.

"Tackle execution," Rennie told reporters, pointing to the Wallabies missing more than 30 tackles in Auckland. "We missed too many tackles and we got put under the heat for it."

The All Blacks' backs were able to exploit that weakness and consistently bust their defensive line or made significant metres past contact.

That gave their forwards momentum and allowed scrum half Aaron Smith to clear the ball quickly, which gave them territory and points-scoring opportunities.

"Last week we got a nice defensive line and made some big defensive tackles," Wallabies captain Michael Hooper said.

"When you're retreating and you're missing tackles and we're going backwards, it's hard."

Rennie said despite defensive issues, he felt at halftime his side were still in the game as they were only trailing 10-7.

The All Blacks, however, scored two quick tries after the break and then the visitors wasted two try-scoring opportunities of their own, while they also turned the ball over too many times, Rennie said.

"You can't give the All Blacks that much ball. They have too many athletes that can hurt you," he said.

"But the boys are working hard and I'm pretty confident that in two weeks we will be a better side."