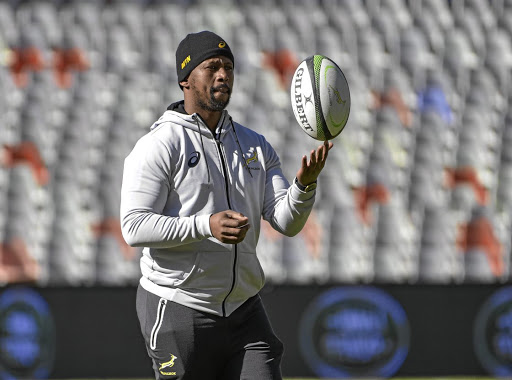 Now in his second tenure as Boks assistant coach, Mzwandile Stick is keeping his eye on the bigger picture.
Image: Gallo Images/Frikkie Kapp

Now that the pre-season is out of the way‚ all eyes shift to the Springboks’ readiness for next month’s Rugby Championship.

The Boks still need government approval to participate in the event‚ even though the international borders have been opened‚ but Springbok Green coach and member of the national team think-tank Mzwandile Stick believes they will be ready for the task if they are required to travel to defend their title.

"We’ve been working around that since the beginning of the year and during lockdown. There’s been a lot of information that’s been shared between us and the players‚” Stick said.

“We’re doing everything in our power so that the players can be ready. The most important part is that because they haven’t played for nearly six months‚ managing them becomes very important. We don’t want to put them under pressure each week.

"When you look around‚ there are a couple of small injuries after one or two games. Player welfare is also very important as they need to be looked after. If our executive members make a decision for us to go‚ then we’ll be fine with going. If the call is made‚ we’ll pack our bags and get on the flight to Australia.”

Springbok Gold coach Deon Davids echoed the same sentiment‚ but is happy with the lessons they’ve taken from the past two weeks.

Super Rugby Unlocked starts on Friday with the Sharks hosting the Lions at King’s Park.

“We are doing our best on the field in terms of preparation and doing the same off the field with the homework we are doing with the players.

"It’s only the second game back for the players and there’s plenty of work that needs to be done. What we can do now is to work with what we have to the best of our abilities and we’ll take it from there‚” Davids said.

Springbok Green captain and regular national team skipper Siya Kolisi said they will be ready to adapt for anything that comes their way.

“We’ve played two matches now but we also know about the gulf between domestic and Test rugby‚ so we do have to play more matches.

"However‚ if the coaches say we need to play more matches‚ we as the players will have to adapt and we’ll hear from them. The most important thing now is to make sure that we are ready and that we’re performing for our provinces‚” Kolisi said.