Sharks say Warriors game to go ahead despite COVID-19 cases 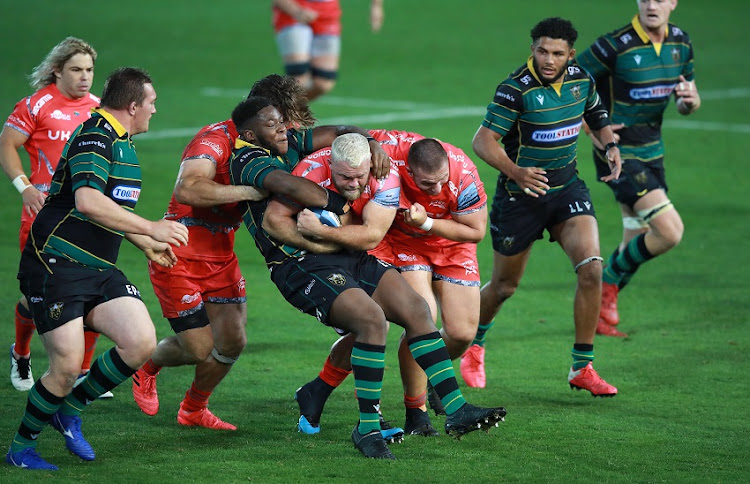 Akker van der Merwe of Sale Sharks charges upfield despite being held by Manny Iyogun during the Gallagher Premiership Rugby match between Northampton Saints and Sale Sharks at Franklin's Gardens on September 29, 2020 in Northampton, England.Sporting stadiums around the UK remain under strict restrictions due to the Coronavirus Pandemic as Government social distancing laws prohibit fans inside venues resulting in games being played behind closed doors.
Image: David Rogers/Getty Images

Sale Sharks have said that Sunday's Premiership match against Worcester Warriors will go ahead as scheduled despite numerous COVID-19 positive tests in their squad.

The Sharks are fourth in the standings and forfeiting the game could see the Sharks lose out on a playoff spot, with fifth-placed Bristol Bears also on 64 points ahead of their final match against the London Irish.

The Premiership season, which was suspended in March due to the pandemic, restarted in August and the final round will be played on Sunday with all six matches kicking off simultaneously.

"After a thorough consultation, the club, its healthcare professionals and rugby management are confident the fixture can be fulfilled safely in accordance with all COVID-19 guidelines," the Sharks said in a statement.

Sharks' players and staff have since been re-tested and the Warriors released a statement saying the match was "still the subject of discussions".

"Warriors would always prefer the outcome of a match to be decided on the pitch and will do so provided we are satisfied that all the COVID-19 protocols and procedures have been followed and no health risk is posed to our players and staff," the club said.

"At the moment we are still awaiting confirmation that those protocols and procedures can be met to allow Sunday's match to proceed as scheduled."