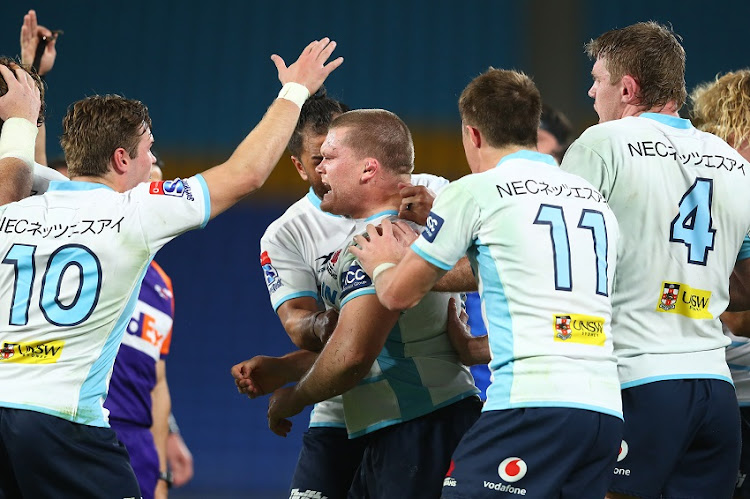 Tom Robertson of the NSW Waratahs celebrates after scoring a try during the round seven Super Rugby AU match between the Western Force and the Waratahs at Cbus Super Stadium on August 14, 2020 in Gold Coast, Australia.
Image: Chris Hyde/Getty Images

New South Wales Waratahs were forced into a late change to their team for Saturday's match against the table-topping ACT Brumbies in Super Rugby AU when test centre Karmichael Hunt pulled a hamstring in training.

The injury to the 33-year-old former rugby league international robbed the Waratahs of their most experienced back for a contest they need to win to push themselves into the mix for top spot in the standings.

Joey Walton will move to inside centre with Lalakai Foketi coming off the bench to play alongside him in the midfield. Former Leicester Tigers winger Nick Malouf joins the replacements for what could be his Waratahs debut.

The Waratahs said Hunt should be available for their match against the Melbourne Rebels next week, where they will be looking to lock up a spot in the top three and a place in the playoffs.

Before that, though, they will be out to snap a five-match losing streak in matches against the Brumbies at what is forecast to be a chilly Canberra Stadium on Saturday.

The Waratahs have put together two successive victories to revive their campaign but it is two years since they last won three or more matches in a row.

Skipper Rob Simmons will be charged with leading the fight to nullify the Brumbies' most potent attacking weapon, the catch-and-drive from attacking lineouts.

"We're going to be under a lot of pressure from that maul," the Wallabies lock told reporters on Friday.

"They'll stick to their strengths - you'd be silly to go away from them so I expect more of the same."

Brumbies coach Dan McKellar has made 16 changes to his matchday squad after suffering their first defeat of the competition against the Melbourne Rebels last time out.