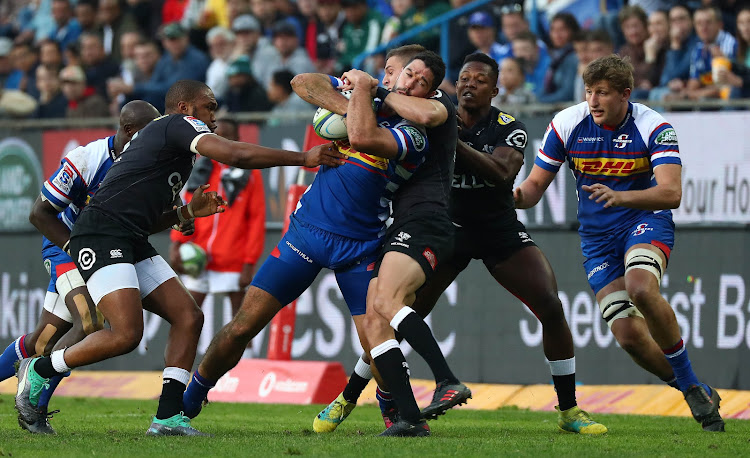 EW Viljoen of the Stormers is tackled by Louis Schreuder of the Sharks during a Super Rugby match at Newlands Stadium, Cape Town on July 7 2018.
Image: Chris Ricco/BackpagePix

Former Western Province and Stormers centre EW Viljoen is the latest player to add his name to the list of acquisitions made by the Lions.

Viljoen‚ who joined Leicester Tigers last year‚ is another midfield acquisition in a field that appears to be increasingly crowded at the Lions. They now have Odendaal‚ Wandisile Simelane‚ Duncan Matthews‚ Dan Kriel and Manuel Ras all vying for a spot in the centres.

Earlier this year Simelane was rumoured to be on the verge of a move from the Lions to seek game time elsewhere but he has since opted to extend his contract with the franchise.

Viljoen is still “stuck” in the United Kingdom waiting to board a flight to South Africa.

“The Lions have been a top team in South Africa over the last few years and I just want to bring my part to hopefully keep them up there‚” said the former SA Schools and SA u20 player.

The Lions have slipped well down the pecking order and were 13th on the points table when Super Rugby came to an abrupt halt earlier this season.

Odendaal‚ who has battled bravely in the Bulls midfield‚ said he was excited to join his former side's foes across the Jukskei River.

“The Lions have a really attractive style of play. I hope I can contribute to that‚” said the former Monument High pupil.

The 29-year-old Dreyer will bring much needed experience to the Lions’ pack. He had played in 80 matches for the Lions in Super Rugby before leaving at the end of the 2018 Super Rugby season. He opted to join former Lions coach Johan Ackermann at Gloucester.

Dreyer‚ who is also a former Monument pupil‚ has played four Tests of wildly fluctuating fortune for the Springboks.