Life after Covid-19: Naas Botha and Swys de Bruin offer their views on what rugby needs to do 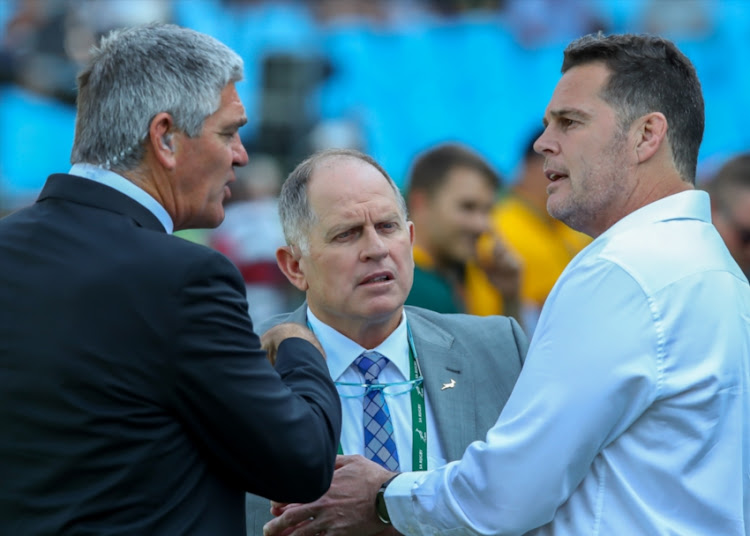 A file photo of Naas Botha, Nick Mallet and Rassie Erasmus during the Rugby Championship match between South Africa's Springboks and the All Blacks of New Zealand at Loftus Versfeld on October 06, 2018.
Image: Gordon Arons/Gallo Images

With the game mostly in limbo‚ the two say rugby has the opportunity to look within and do everything it can to attract eyeballs when it fully emerges from its Covid-19-induced hiatus.

“I like any law change that is going to make for quicker ball with which to attack.

"With respect‚ I don’t like it when defence-minded teams run the show in the way they have‚” said De Bruin.

The coach pointed to developments in Australia where the game has restarted with some useful law variations that have helped speed it up.

“I quite like what they are doing in Australia at the moment‚” said De Bruin.

“When the attacking team takes the ball over the goalline but don’t score‚ there is no five metre scrum.

"Instead the defending team has to drop in from the goalline and they are not allowed to drop the ball out.

“From there you can plan an amazing attack. It means the attacking team gets the ball back and they resume their attack immediately.

"In other words‚ you don’t get all those boring scrums resets‚” De Bruin pointed out sagely.

As you may have gathered De Bruin is no fan of the game getting bogged down at scrum time.

“It wastes so much time‚” noted De Bruin before he recalled how richly his former team benefited from the set piece.

“Scrumming is important. At the Lions we had a helluva of pack and Balie Swart drilled them into a winning unit.

"That helps you no end‚ but I believe the scrum and the maul cannot be allowed to dominate the game.”

In his playing days Botha also profited from the Bulls' almost inbred ability to put the squeeze on the opposition at scrum time.

He also advocates the speeding up of the game to help give it broader appeal.

“Make the ball the offside line instead of the hindmost feet‚” said Botha animatedly.

“On defence‚ certainly have the hindmost feet as the offside line.

“If however I have a chance of winning the ball quickly the law says I have to go from behind.

"That kills the game because it leads to penalties that just serve to stop the game.”

Botha has also watched the developments Down Under with interest.

"A lot of those were breakdown penalties and that’s why I say‚ make the breakdown simpler.”

He has another breakdown related bugbear.

“Also‚ when you get tackled you have to get an opportunity to place the ball.

"Often we see the first player to arrive after the tackle puts his hands on the ball before the tackled player gets a chance to place the ball.

“The tackled player then gets pinned for not releasing.

"The law says the tackled player must place the ball immediately but if that player doesn’t get the opportunity he should not be penalised‚” argued Botha.

"You need those grinding games but people generally want to watch more of a spectacle‚” said De Bruin.