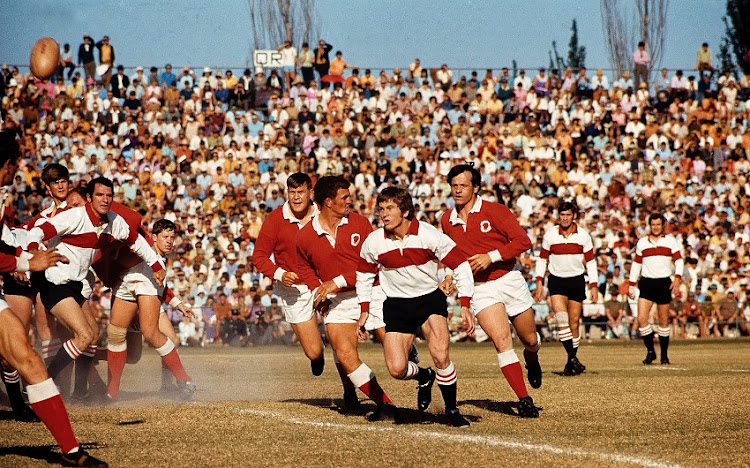 Paul Bayvel of Transvaal during 1972 Currie Cup final against Transvaal at PAM Brink Stadium in Springs in South Africa. Photo is found in Wessel Oosthuizen's "Portrait of Rugby" which is a collector's item book published in 2008 and re-edited for a second print in 2016.
Image: Wessel Oosthuizen/Gallo Images

Paul Bayvel, one half of the most enduring Springbok halfback combination of the 1970s, died this week.

Bayvel, 71, who played in 10 Tests between 1974 and 1976, died following a protracted battle with lung cancer. The cancer had spread to his spine.

Scrumhalf Bayvel represented the Springboks in an era in which they experienced spectacular highs and lows. He was dropped after his debut Test against Willie-John McBride’s British and Irish Lions and was replaced by a No8, Gerrie Sonnekus. It is still regarded as the biggest selection blunder in Springbok history. Bayvel was duly restored to his position.

Although his Test career started in that disappointing series defeat, he was to play throughout the 1976 series win against Andy Leslie’s All Blacks in 1976.

It was his partnership with Transvaal (Golden Lions) teammate Gerald Bosch that greatly contributed to the Springboks’ success in that series. The most frequently used commentary whenever they played together was “Bayvel to Bosch, and he kicks.”

“It is with great sadness that we heard of Paul's passing,” said SA Rugby president Mark Alexander in a statement. “He was a formidable player and a person and will be remembered by all those who knew him,”

“It is always sad to lose a family member and we want to wish the Bayvels, as well as his other family members and friends, our sincere condolences in this time. Paul was a rugby man and part of our extended rugby family as well, so we are all poorer for his passing.”

Bayvel is survived by his wife, three daughters and two grandsons.