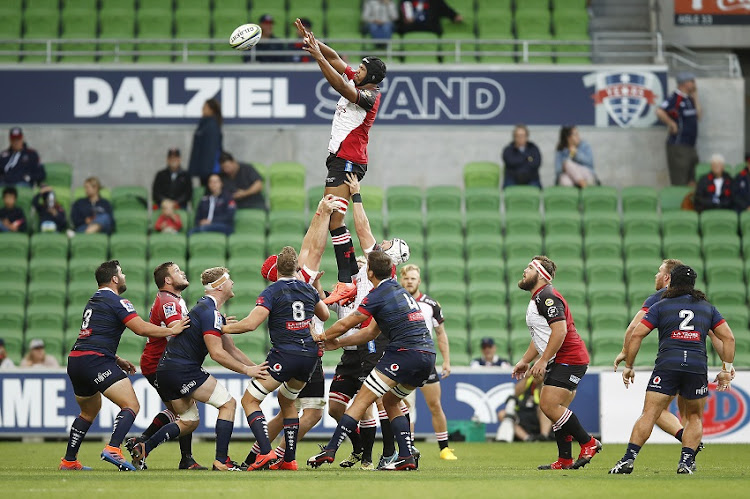 Marvin Orie of the Lions wins a line out during the round six Super Rugby match between the Rebels and the Lions at on March 07, 2020 in Melbourne, Australia.
Image: Daniel Pockett/Getty Images

The suspension of Super Rugby matches may have helped arrest the Lions’ slide‚ but it could prove a temporary reprieve if they leave the fault lines in their game unattended.

The Lions have won just one of their six matches this season‚ but that win over the Reds is largely forgotten given their defeats to the Jaguares‚ the Stormers‚ as well as their tour matches in Australasia against the Waratahs‚ the Rebels and the Blues.

The Lions were due to play the Highlanders next weekend but that match is among those that have been postponed over the last fortnight.

The Ellis Park-based team arrived back from Australasia on Sunday evening and have been told to go into self-isolation. It means as a group they can do very little to address the shortcomings that have hampered their game thus far this season.

However‚ Lions chief executive Rudolf Straeuli who had been travelling with the team and is also in self-isolation‚ said the players have a ‘to-do’ list while in quarantine.

“They are in 14-day isolation and are on special leave. They are not allowed to gather in groups‚” Straeuli said.

“We have the technical expertise to stay in contact. They have been and will continue to get individualised programmes‚ especially pertaining to their fitness.

“They can have daily contact with the coaching staff as well as the team physician. If they need to see the doctor they can make an appointment.”

Straeuli said none of the players on tour had displayed flu-like symptoms. “On tour I realised the virus issue was going to get worse and we put things in place to get the team out as quickly as possible once the decision was made.”

The Lions‚ however‚ who are third-from-bottom on the overall Super Rugby points table above the Waratahs and the Sunwolves‚ will have their work cut out before hostilities resume after the mandatory two-week break.

They have looked like a side lacking experience‚ most notably in their coaching group at a time when coherent‚ clear‚ decisive leadership is required.

Straeuli made the point that things aren’t as bad as they seem.

“I don’t think people are seeing the entire picture. The big thing for us is to get guys back from injury [Manuel Ras‚ Hacjivah Dayimani‚ Wandisile Simelane‚ Vincent Tshituka all picked up injuries on tour‚ while Jaco Kriel‚ Rhyno Herbst and Ross Cronje have struggled with long term injury].

“We had a difficult draw starting away to the Jaguares. It is important to see how the tournament will be reshaped now‚” said Straeuli in reference to the potential changes to the draw that will allow derby matches to be played while travel restrictions are in place.