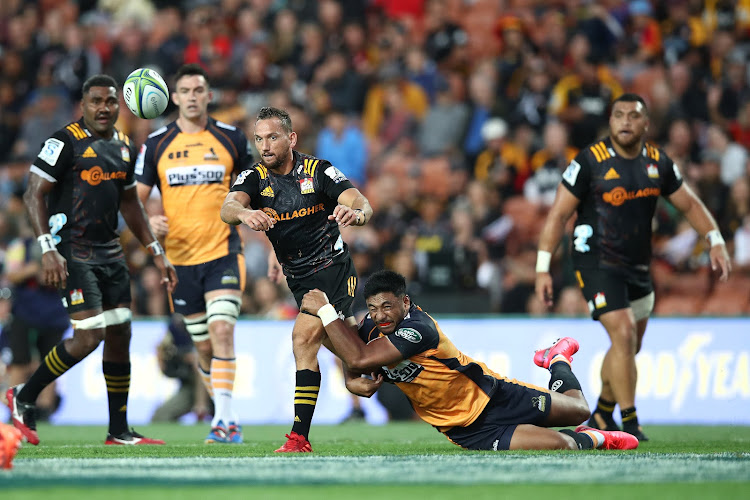 Aaron Cruden of the Chiefs passes during the round four Super Rugby match between the Chiefs and the Brumbies at FMG Stadium on February 22, 2020 in Hamilton, New Zealand.
Image: Phil Walter/Getty Images

Super Rugby matches in Japan may be under threat due to the coronavirus but it should have little impact on the South African conference.

Sanzaar‚ the organisers of the tournament‚ are monitoring developments in Japan after J-League soccer matches were postponed until March 15 due to the spread of the virus that has infected more than 850 people and caused four deaths in the country.

The virus has claimed more than 2600 lives and the World Health Organisation said on Wednesday 80 988 people had been infected worldwide.

Sanzaar will monitor the situation and its board will address the matter in a meeting early next month.

The matches that will come under the microscope are on 8 March when Japan’s Sunwolves team host the Brumbies in Osaka‚ on April 5 when the Reds play in Tokyo‚ on 8 May the Waratahs do the same‚ while the Stormers play there eight days later.

The Sunwolves’ most immediate engagement is this weekend against the Hurricanes in Napier. The Lions host them on 18 April at Ellis Park.

Other sports events have also been affected by the spread of the virus.

Japan’s Grand Sumo Tournament scheduled for Osaka is in jeopardy. According to the Japan Times Nippon Pro Baseball announced on Wednesday it will hold all of its 72 preseason matches behind closed doors.

Japan Boxing Commission and Japan Pro Boxing said it would postpone or cancel all bouts scheduled to take place in Japan in the next month.

The newly established Global Rapid Rugby have had to alter their fixtures in that country‚ while Europe has not escaped the reach of the virus. England’s Six Nations match in Italy on 14 March may also be moved.

Already the virus has caused the postponement of the World Sevens Series events in Hong Kong and Singapore from April to October this year.