Bulls coach Pote Human looks on the bright side after defeat 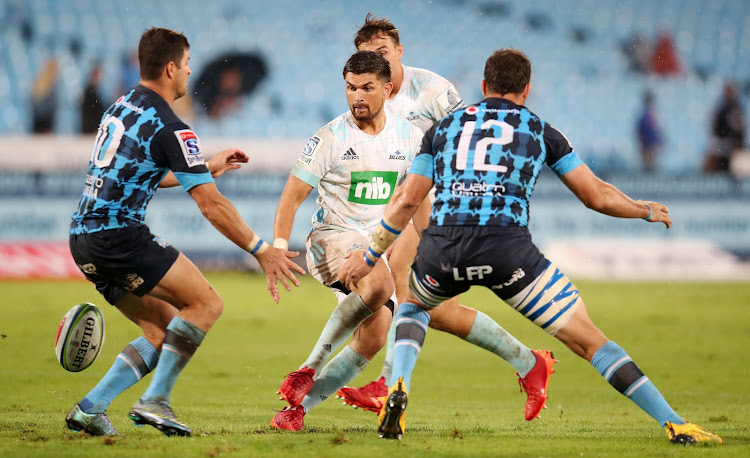 Otere Black is sandwiched by a challenge from Morne Steyn (L) and captain Burger Odendaal (R) during a Super Rugby match between the Blues and the Vodacom Bulls at Loftus on February 22 2020.
Image: Muzi Ntombela/BackpagePix

On the back of three successive defeats at the start of the Super Rugby campaign‚ Bulls coach Pote Human insists that it’s still early to press the panic buttons as his charges have got what it takes to turn their fortunes around.

The Bulls lost to the Sharks and the Stormers away from home and on Saturday were handed their first defeat at Loftus by the Blues to leave them with one point on the standings.

The Pretoria side are also sitting at the basement of the South African Conference and second from the bottom on the overall standings above the Waratahs who are yet to register a point so far this season.

“The log position will always be on the back of your mind‚ but there is still a long way to go in the competition.

"Unfortunately we lost a home game and we have to rectify some of the mistakes for next weekend‚” said Human.

Some of the mistakes that cost them in the 23-21 loss to the Blues at a wet Loftus were two yellow cards to Andries Ferreira and captain Burger Odendaal in the space of four minutes in the first half.

“Obviously I am disappointed with the result‚" Human continued.

"I thought we played the better rugby on the night but certainly our discipline cost us and we will have to look into that.

"Our set-piece was good‚ we scrummed and mauled them‚ we just have to get our discipline right.

"We have to get the guys up and running again but definitely this defeat is a hard one to take at home.”

Asked to weigh in on the yellow card that was given to Odendaal after what was judged to be a high tackle on Emoni Narawa‚ Human said they respect the decision of referee Marius van der Westhuizen.

“I thought it was a tough call on Burger‚ I really thought the Blues player bent down into the tackle‚" he said.

"I thought it was a great tackle and it wasn’t like he was injured or anything like that.

"It was a tough one for us. It is difficult but we have to respect the decision of the referee and play accordingly.”

Burger was happy to escape with only a yellow card.

“In that moment if felt fine but as soon as I looked at the replay on the screen and saw a bit of contact to his head‚ I knew I was in trouble‚" the player said.

"In the end I thought they wanted to give me a red card but because he ducked down they changed it to a yellow. I am happy with a yellow.”

Sharks name team to face the the Rebels

With Sharks captain Lukhanyo Am given a break this week‚ exciting halfback Sanele Nohamba gets a chance to start at scrumhalf in Saturday’s Super ...
Sport
1 year ago
Next Article