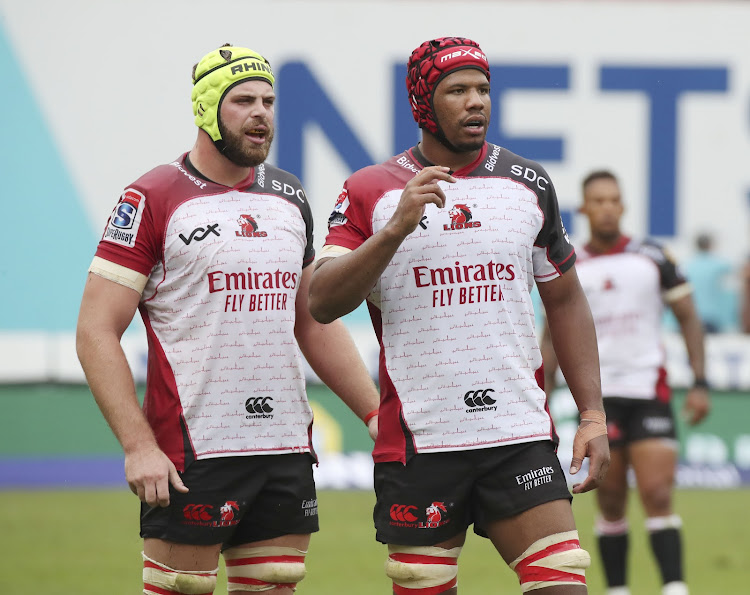 Ruben Schoeman (L) and Marvin Orie (R) during a Super Rugby match against the Lions in Johannesburg on February 8 2020.
Image: Gavin Barker/BackpagePix

When it was put to him that the unbeaten and bang in-form Stormers are salivating at the prospect of coming to Ellis Park this Saturday‚ Lions lock Marvin Orie asked: “Does that mean they are excited? Then ‘exciting’ for us is an understatement.

“It has been a tough couple of days for us. Our coaches have been working really hard. It is up to the players to bring the excitement come three o’clock on Saturday.”

Orie‚ who played some of his youth rugby in the Cape before transferring to the Blue Bulls and then the Golden Lions‚ is as versed at getting under the opposition’s skin as he is throwing his weight around in the tight loose.

The lock is perhaps at his best riling South African opposition but stressed the point that his motivation before each game remains the same.

“In South African derbies‚ there is something different to playing the overseas teams. I’m not saying there isn’t motivation playing overseas teams but this is a local derby.

"The Stormers have been playing well and we’re on an upward curve‚ so it is exciting.”

On that score‚ the reputations in the opposing team matters little to him.

“I think as a rugby player when you start measure yourself and motivate yourself depending who you are playing against‚ you are venturing into dangerous territory‚” he said when asked about the prospect of playing against a Galactico like Pieter-Steph du Toit.

“That doesn’t really change for me.”

Although the Lions eked out a win against the Reds last weekend‚ they have a few areas that require urgent revision.

The scrum is the most pressing‚ but they also lost the odd line-out‚ albeit in very greasy conditions.

“We strive for 100 percent in the line-outs every week. Will we get? I don’t think so. We strive for I‚” said Orie.

Fullback Andries Coetzee contends much of last week’s splutter against the Reds was due to the weather throwing them a curveball.

“We are hoping for a sunny day on Saturday‚” he said optimistically.

That way the Lions may be able to play a quick tempo game and increase their chances of becoming the first team to record points against the Stormers this season.

The Hurricanes and the Bulls both failed.

“We believe so‚ yes‚” he said when asked if they will register points.

“We did discuss it. It is a massive achievement. Not a lot of teams can do that in Super Rugby. We’ll try and put them under pressure.”

Coetzee dead-batted the idea of him attempting a sneaky 50m drop goal in the opening minutes.

“No‚ not this Saturday.”

The Lions’ scrum was on the receiving end against the Reds and this has not gone unnoticed in Cape Town.
Sport
1 year ago

The Hurricanes loom large as a clear and present threat for the Sharks‚ a reality captain Lukhanyo Am is patently aware of ahead of their clash in ...
Sport
1 year ago

South Africa’s rugby franchises are increasingly feeling the pinch. Even those who have owners with pockets as deep as mineshafts have had to bow to ...
Sport
1 year ago
Next Article