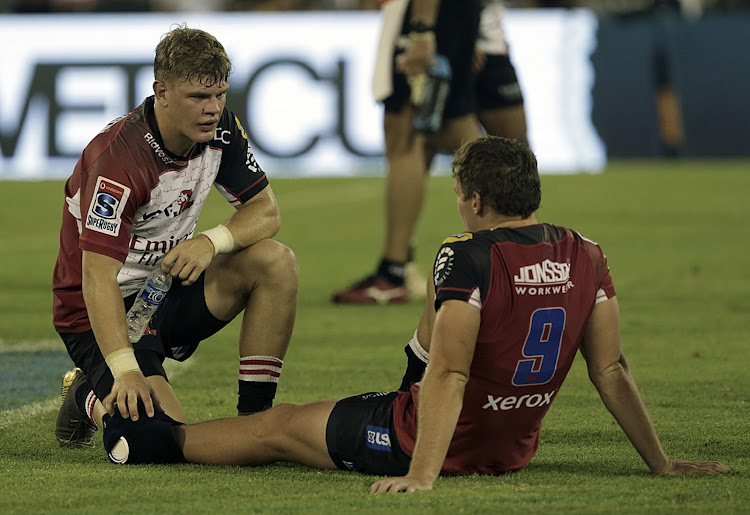 Morne Van Den Berg and Andre Warner cut a dejected figure at the end of their disappointing defeat against the Jaguares on February 1 2020 in Buenos Aires.
Image: Daniel Jayo/Getty Images

In search of vast improvement after their 38-8 humbling at the hands of the Jaguares‚ the Lions made two changes to their team due to play the Reds at Ellis Park on Saturday.

Andries Coetzee is back in the last line of defence‚ while green horn Morne van den Berg graduates from the bench to replace the injured Andre Warner at scrumhalf.

Coach Ivan van Rooyen is loath to make wholesale changes following the big loss to the Jaguares‚ but he is hoping that Coetzee can bring stability with his experience and that Van den Berg’s exuberance will help spark the back division.

“He had an unbelievable pre-season‚” said Van Rooyen of Van den Berg.

“He impressed on Super Hero Sunday. We had to give him an opportunity.

"Just for continuity’s sake we felt it was the right thing to do. We know what Dillon (Smit) offers‚ he is obviously a great player.”

Coetzee who has been an ever present in the Lions team over the last few seasons is back from Japan.

“He is in great shape and great form. It is nice to get guys like that back.

"Jaco (Kriel) will come back‚ while Ross (Cronjé) and Jamba (Ulengo) are a week or two away. Willem (Alberts) might be selected next week‚” said Van Rooyen.

Again there was no room for centre Wandisile Simelane in the match day 23‚ with Dan Kriel and Duncan Matthews the preferred midfield operators.

Loose forward Hacjivah Dayimani who was on the bench last week drops out of the match day 23 this week.

Van Rooyen’s team fell well off the pace‚ and off tackles in Buenos Aires last week. They missed 37 tackles‚ with the Jaguares particularly running amok in the second half.

“We’ve worked on everything‚” Van Rooyen said when asked if defence was a priority ‘work-on’ this week.

The coaches believes he learnt a few things about his players last week.

“They fight. Under pressure we saw where some guys are and maybe we became a group.

"It was also the first time certain combinations played together for us. It was a good reflection of what we need to fix.”

That defeat means the Lions are under pressure to bounce back against the perennially struggling Reds this week.

They only have two home matches in their first eight matches.

Defeat this week would be most unpalatable‚ especially with the resurgent Stormers travelling to Johannesburg next week.

The Lions team to play the Reds:

Sharks coach Sean Everitt may resist the temptation to start with Sanele Nohamba at scrumhalf ahead of the experienced Louis Schreuder for Friday's ...
Sport
1 year ago

A swansong for Newlands and a first time visit for the All Blacks to Nelspruit are the standout features in the Springboks’ home matches this year.
Sport
1 year ago
Next Article