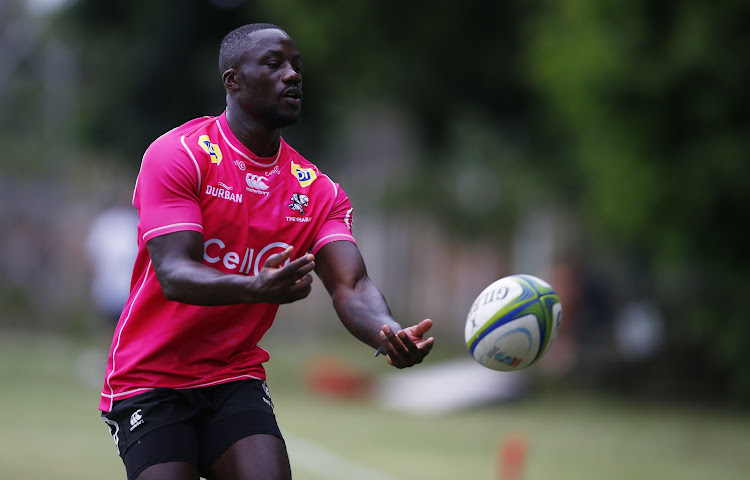 Madosh Tambwe will slot in at wing in place of injured Springbok S'bu Nkosi for his Super Rugby debut for the Cell C Sharks when they confront the Highlanders in Dunedin on February 7 2020.
Image: Steve Haag/Gallo Images

Sharks coach Sean Everitt has resisted the temptation to start with Sanele Nohamba‚ but was forced into another change at wing for Friday’s Super Rugby date with the Highlanders in Dunedin.

The Springbok winger has a minor niggle that’s serious enough to have him cotton-wooled for the first game of the four-match tour.

Louis Schreuder will stay as the starting scrumhalf while captain Lukhanyo Am and reserve hooker Craig Burden will be raising their 50th Super Rugby matches for the Sharks.

Having escaped the searing February heat in Durban‚ Everitt said they should be playing better rugby in far more amenable conditions.

“The conditions will suit us. I think the guys will find it refreshing although this first week is tough because we’ll have just one training session due to the travel‚” Everitt said.

“But we are happy with all the prep we did in pre-season‚ and the fact that the injury toll wasn’t serious outside of a minor niggle that S’bu has‚ is a big plus.

Maybe Everitt keeping Schreuder as the starting halfback was informed by Aaron Mauger’s decision to start with experienced All Black scrumhalf Aaron Smith.

The Highlanders have debutants in pivot Mitch Hunt and wings Jona Nareki and Tima Fainga’anuku.

Everitt understands that winning all four games on tour is a tough ask‚ but getting off to a winning start is critical.

Maintaining consistency is the most important for Everitt at the moment.

“We’ve said this before that this team needs to be more consistent. We’ve been criticised for that‚ so consistency is key‚” he said.

“We know that being away for four weeks overseas is tough but this team has a vibe about it and they are really keen to take up the challenge.”

You’d think a dominant performance against a team that reached the Super Rugby semifinals for the last three years would satisfy the Stormers‚ but it ...
Sport
2 years ago

Sharks coach Sean Everitt may resist the temptation to start with Sanele Nohamba at scrumhalf ahead of the experienced Louis Schreuder for Friday's ...
Sport
2 years ago
Next Article