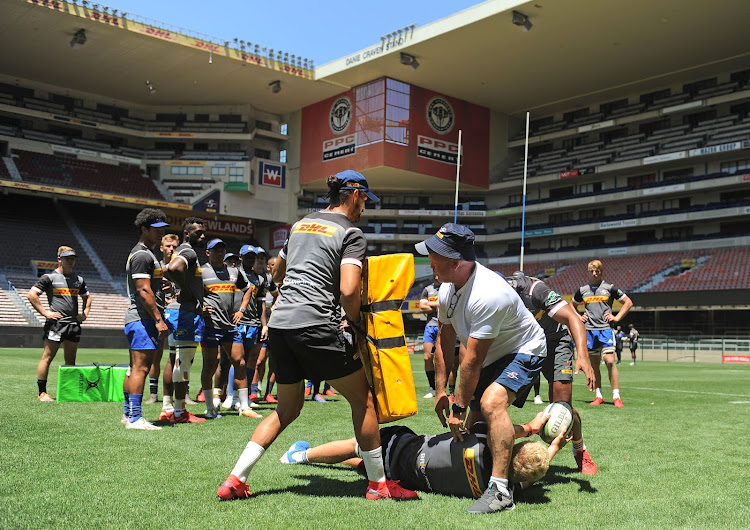 John Dobson and his team hard at work during a training session at Newlands.
Image: Ryan Wilkisky/BackpagePix

The injuries to Siya Kolisi and Bongi Mbonambi are worse than expected.

According to the Stormers coach John Dobson‚ Kolisi will be out for between 10 to 12 weeks‚ while Mbonambi’s season may be over.

Both left the field during the Stormers’ 27-0 opening Super Rugby win over the Hurricanes at Newlands last Saturday.

Kolisi left the field in the 25th minute with a knee injury after taking a late tackle‚ while Mbonambi departed the scene with a torn hamstring in the second half.

“It was an expensive win‚” sighed coach Dobson.

“They are more serious than we thought.

"Siya is going to be three months I reckon‚ or 10 to 12 weeks. Bongi could be over for the season. They are going to have to operate today or tomorrow‚” said the coach.

Losing two Rugby World Cup winning forwards will come as a huge blow to the Stormers.

While their loose forward cupboard is well populated replacing a hooker of Mbonambi’s ilk is going to be a tall order.

Although injuries are part of rugby’s rough and tumble Dobson was far from pleased with the way Kolisi suffered damage to his left medial collateral ligament.

After Kolisi offloaded to fellow backrower Jaco Coetzee‚ Hurricanes hooker Ricky Riccitelli charged late into the Bok captain leading with his right shoulder. It was a clear late tackle.

“I wasn’t happy with the nature of that incident‚” said Dobson careful not to overstate his displeasure.

Dobson did‚ however‚ describe the match as a mean spirited game.

It does‚ however‚ leave the Stormers in a slight selection pickle for this weekend’s clash against the Bulls.

Dobson is expected to introduce No 8 Juarno Augustus‚ as well as lock Cobus Wiese this week‚ while another lock JD Schickerling will have to wait another week before he can make his return from injury.

Augustus is likely to come off the bench against the Bulls‚ while Coetzee‚ who was also forced to leave the field against the Hurricanes‚ could shift to No 8.

Star scrumhalf Herschel Jantjies took a knock to the throat‚ but he will be ready to play the Bulls.