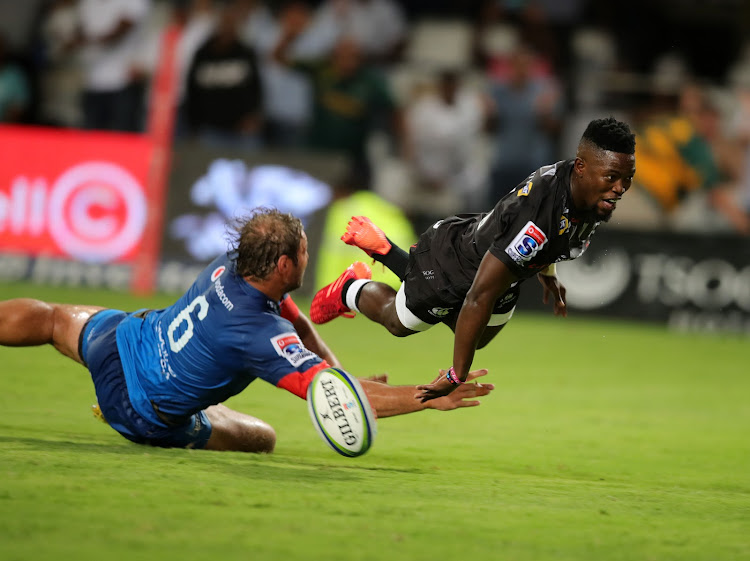 Sanele Nohamba will be hoping to put experienced Louis Schreuder out of the Sharks starting lineup.
Image: Samuel Shivambu/BackpagePix

Sharks coach Sean Everitt may resist the temptation to start with Sanele Nohamba at scrumhalf ahead of the experienced Louis Schreuder for Friday's Super Rugby date with the Highlanders in Dunedin.

While Schreuder was the sure and steady starter in a tricky first half for the hosts when they saw off the Bulls 23-15 last Friday‚ Nohamba dazzled for the Sharks in a grandstand finish.

Nohamba scored the match-winning try that snapped a nine-match losing streak against the Bulls.

“We haven't announced the team yet‚ but he's definitely in consideration to start.

"I believe in having continuity in the team. I know that Sanele's played very well and had a very good Currie Cup‚ but that is something we are discussing‚” Everitt said.

While the Bulls' structured approach played into the hands of the Sharks‚ the Highlanders are uncoordinated and chaotic.

The Sharks though have tended to live well with this type of New Zealand rugby.

At times‚ they've been successful against it‚ but generally in the middle of the season when they've hit their straps.

The Sharks are far from hitting their straps‚ which makes Friday's fixture a tricky one.

A distinct advantage the Sharks do have is a settled and solid forward pack‚ not that it serves as a deterrent in New Zealand as some of those franchises somehow find a way to get around strong South African packs.

Everitt knows his team will need a better kicking game‚ but the forwards will have to front up very quickly.

“We struggled against the Bulls in the set-piece in the first half but we seemed to sort our issues at half-time.

"I was happy that the team was able to adapt and learn fast. If we can nullify the Highlanders set-piece‚ we'll be in for an easier day defensively‚” Everitt said.

“The Highlanders and the Bulls are two different teams. Both teams went into the game on Friday with a kicking plan.

The Sharks tend to have a level of touring competence that's often beyond most South African teams in New Zealand.

While they don't always win‚ they play very well.

Last year‚ they forced a draw against the Crusaders while a tactical brain explosion from former coach Robert du Preez gave the Chiefs an undeserved 29-23 win.

In 2018‚ the Sharks sleepwalked their way to two defeats in Australia‚ but found their rugby voice with a 63-40 win against the Blues.

They were then robbed by a last minute try the following week against the Hurricanes in Napier.

Everitt has seen how good touring has been for this team and hopes it will continue in that way.

“It's a case of continuing from the past and taking confidence from what has taken place in the past.

"We tend to tour well because we're a good bunch of people and the guys enjoy being together as a group‚” Everitt said.

“It also give us time to prepare nicely‚ spend time together and build a bit of gees.”