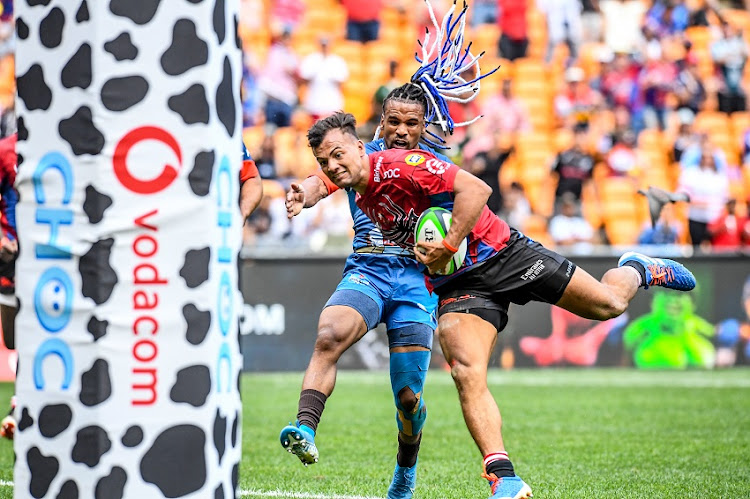 Duncan Matthews of the Lions outruns Rosko Specman of the Bulls and score a try during the SuperHero Sunday match between Vodacom Bulls and Emirates Lions at FNB Stadium on January 19, 2020 in Johannesburg, South Africa.
Image: Sydney Seshibedi/Gallo Images

Not so long ago Duncan Matthews’ peripheral existence at the Bulls motivated his request for a transfer.

Amid some wrangling he moved to the Lions and is now as close to the action as he’s ever been.

The erstwhile fullback/wing has been earmarked to play outside centre for the Lions in Super Rugby and he is rather relishing the prospect.

“I’ve always been at wing or fullback where you kind of always receive the pass at the end. Your role isn’t that important. At 13 you have a much more prominent role.

Matthews insists he will get ‘better opportunities’ in his new position than at fullback.

“At 13 you can decide what happens next. I don’t think 13 is more restrictive. I think you have more freedom there.”

His move closer to the action appears to be mutually beneficial.

“I wanted to improve‚" he said.

"The coaches approached me and asked whether I’d be comfortable playing there. That’s where I wanted to play for a long time.

It showed during Super Hero Sunday in Soweto in the Lions’ defeat against the Bulls.

Matthews had the satisfaction of scoring two tries against the team he felt he had to leave last season.

He has come into the season with renewed vigour after going into last year’s Currie Cup a little undercooked following his move from Pretoria.

“I’ve done the hard work. It was very important for me to improve on my fitness from last year. There was a period where I didn’t train at the Lions.

"I wasn’t injured‚ it was just a period where I needed to be cleared before joining the Lions‚” said Matthews.

“I lost a bit of fitness going into that Currie Cup.

"The emphasis for me has been to be in the best physical shape and conditioning I can be. They’ve drilled us. The coach wants to push us to our limits. The body has adapted to that strain‚” said Matthews.

Being in the best physical shape he can be is particularly gratifying for Matthews. Injury has punctuated much of his career but now he can make a fresh start.

“Getting game time‚ that is the most exciting thing for me. Just being on the field will be good for the team. I will perform my role. Playing as much rugby as I can.”