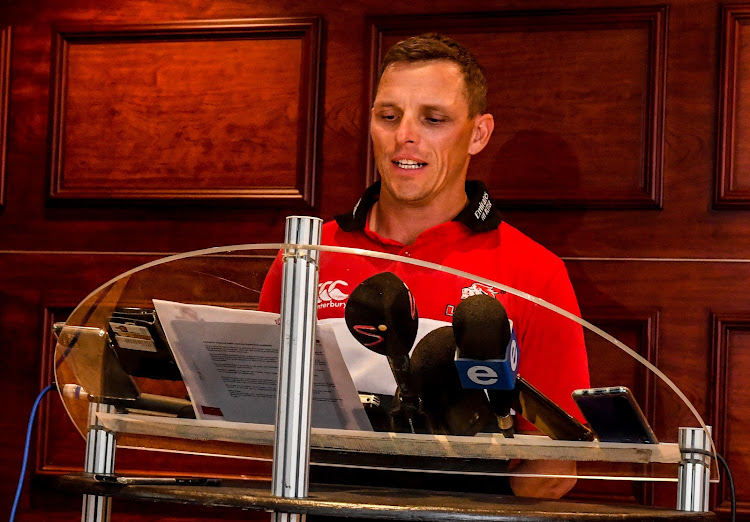 The Lions on Thursday invited the media to a place called the White House and what they said at times sounded like bluster.

Having made three Super Rugby finals in a row from 2016‚ the Lions slipped to fourth in the South African conference last year but that has not stopped them from aiming perhaps ambitiously high.

“This is going to be a very important season‚ not just for the Lions but all the South African franchises‚” said Lions chairman and main benefactor Altmann Allers.

“That is what the Lions are setting out to do. It is a tall order. We have a relatively young team and a young coach and management team.

“We are not going to use those words if we are not successful. We will keep on trying until we’ve won that trophy. We haven’t held that trophy yet.

“I hope these aren’t just empty words but that we can look back at the end of the season at that day in January when the Emirates Lions told you we mean business‚” said Allers‚ who perhaps deserves credit for aiming big.

There are no black coaches in the Lions Super Rugby group. The Lions had Joey Mongalo in their coaching group but his contract expired in September last year before an indecent assault conviction in Australia was overturned.

Chief executive Rudolf Straeuli explained that it was a work in progress.

“We have black coaches who we are busy developing. Our system is such that we do develop from within and that we don’t necessarily look elsewhere.

“We’ve got good coaches like Mzwakhe [Nkosi] who was roped in with the SA Schools team‚ with our juniors but he isn’t ready yet. We also have Bafana [Nhleko].”

Straeuli admitted the case in Australia against Mongalo placed the Lions on the horns of a dilemma.

“It placed us in a very difficult situation. Joey was our most experienced black coach. We couldn’t rope him back in at the time his contract expired [in September last year].”

Straeuli said‚ however‚ that he was in discussions with Mongalo.

“All our coaches operate under one roof. Mzwakhe works closely with Cash [Van Rooyen] and will take our SuperSport Challenge team.

“We really didn’t want to get someone from the outside and rather work on the premise of advancing our own the next best.”