The Blitzboks surge into the semifinals of the World Sevens Series 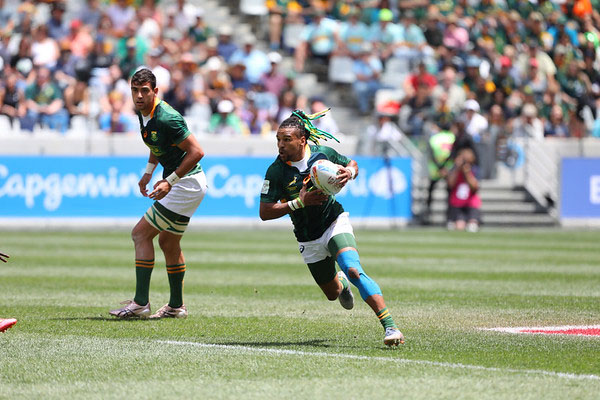 The Blitzboks had to come from behind for their victory over Kenya.
Image: Springboks Sevens/Twitter

The Blitzboks surged into the semifinals of the World Sevens Series on Sunday when they beat Kenya 17-5 after falling behind early in the game.

He would have been exasperated when the referee’s arm was raised in the first move of the game when his team was sanctioned for a high tackle.

The home team struggled to find rhythm and indeed range in their passing game.

The Kenyans’ physicality‚ which has been honed by their Kiwi coach Paul Feeney‚ was partly responsible for this.

The Blitzboks‚ who beat Kenya 17-12 in Dubai last week‚ were forced to come from behind again after Alivin Otieno scored.

Imprecision in the pass cost the home team on a few occasion but eventually their sheer bloody mindedness got them over the line.

After Senatla made inroads down the left touchline‚ the hosts hit to the right when Ruan Nel powered over to score two minutes from the break.

The teams went into half-time five-all but the hosts went ahead when they profited from a line-out five metres out.

Justin Geduld swung the ball out to a speeding Nel who crashed over near the uprights.

When Selvyn Davids chased down a chip ahead from captain Siviwe Soyizwapi the win was sealed.

Geduld missed the conversion but he had gone through a significant milestone on Saturday.

Geduld‚ who went past the 1000 point mark‚ wasn’t necessarily enthused about reaching the landmark.

“It is a team sport‚” said Geduld.

“It is great to hear I have scored those points‚ but that is mainly thanks to my team-mates.”

In the women’s draw New Zealand came from behind to win their quarterfinal against England in extra time.

The Blitzboks made a winning start in their bid to claim a maiden World Sevens Series tournament in Cape Town by downing Japan 49-0 in their opener ...
Sport
2 years ago
Next Article