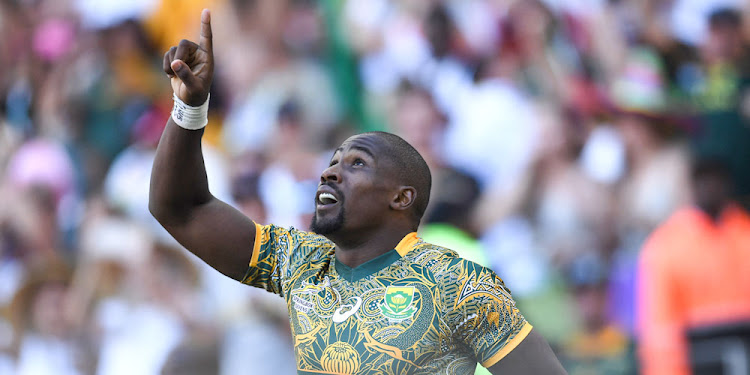 The Blitzboks are in the final of a World Sevens Series event for the second week in a row after they beat France 21-12 on Sunday.

After last week’s win in Dubai they again surged into the final when they accounted for a plucky French side.

Again‚ however‚ they were afflicted by a slow start.

They made too many unforced errors which allowed France a foothold in the game.

In fact‚ it was France who shot into the lead when Marvin O’Connor crashed over to score a converted try.

Ruan Nel‚ however‚ again made some telling contributions with his gainline busting exploits.

He helped level matters when he touched down before JC Pretorius sold the French defence a rather cheap dummy next to a ruck and ran clear to score under the posts.

The result was sealed when Siviwe Soyizwapi rid himself of a French defender with 90 seconds left on the clock. France hit back in the dying seconds with a try but by then the result was beyond doubt.

The Blitzboks earlier beat Kenya 17-5 to reach the semis‚ while France got into the semis after a 19-10 win over Argentina.

Fiji beat Ireland 31-12‚ while New Zealand beat Scotland 35-19 to set up their semi-final.

In the women’s draw there were semifinal wins for New Zealand over Canada and Australia over France.

The Blitzboks made a winning start in their bid to claim a maiden World Sevens Series tournament in Cape Town by downing Japan 49-0 in their opener ...
Sport
2 years ago
Next Article