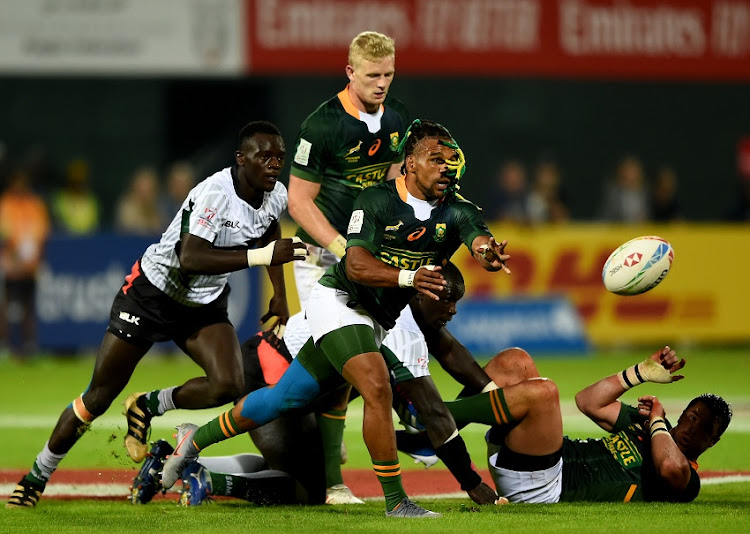 The Blitzboks' Rosko Specman was one of the key performers as South Africa put the United States to the sword in Cape Town on Saturday.
Image: File Image / Tom Dulat / Getty Images

For effort and sheer endeavour you cannot fault the Blitzboks.

They swarm, harass and harangue the opposition until a weak spots appear and it was those hallmarks that helped propel them into the knockout stages of the Cape Town leg of the World Sevens Series on Saturday.

They beat the United States 21-15 to propel themselves into the quarterfinals of the tournament after an unblemished run in the pool stages.

Going in search of their second consecutive title in the World Sevens Series, the Blitzboks got onto the front foot early in their last match in the pool stages. They set the tone and although the USA finished with a flourish, it was too little too late.

The Blitzboks made all the early running before Dylan Sage scythed through a gap to score. In Sevens rugby, however, things can change in a blink and from the restart Chris Dry was sent to the bin which required some reorganisation.

From a hack ahead the Blitzboks made the most of their electric speed and although the visitors got to the ball first they made a hash of securing it. It was in that instant the ball was nudged ahead and it was Rosko Specman, the keenest of chasers, who profited, and scored.

Blitzboks rally from behind to vanquish defending champions Fiji

The Blitzboks sealed an impressive 26-14 come-from-behind win over Fiji on day two of the World Sevens Series tournament here on Saturday.
Sport
2 years ago

Selvyn Davids added another try to effectively seal it for the Blitzboks.

It wasn’t just their win over the USA that helped secure their passage as pool A winners.

Earlier the Blitzboks secured an impressive 26-14 come-from-behind win over Fiji.

They scored 26 unanswered points after they stared down the barrel early on against the defending series champions.

The hosts showed huge pluck in clawing their way back into the contest but it took them a while to get going. Frankly, they looked a little rattled in the early stages. They managed to make inroads in terms of field position but they were prone to error.

Their defence was exposed after three consecutive penalties resulted in a yellow card for Seabelo Senatla. It helped Jerry Tuwai spot a gap and later Vilimoni Botitu streaked into space to hand the islanders a 14-0 lead.

Specman pulled one back within a minute of the interval and Justin Geduld duly converted from under the sticks. The Blitzboks won comfortably in the end.

Despite the capricious weather the crowd warmed to the occasion. The sun played hide and seek but that did not deter Capetonians from dressing up and some down for the occasion.

Leopard print and camouflage seems to be en vogue at the minute. As you’d expect on dress-up day, though, there was huge variety. A half a dozen young females dressed as brides and walked in formation and the young men who crossed their path cut a wide berth.

Unsurprisingly too there was a group of Speedo-wearing Faf de Klerk’s and there were lots of lawn tennis players too. As the clouds rolled in the Faf’s shrunk in numbers, in every way imaginable.

The Blitzboks made a winning start in their bid to claim a maiden World Sevens Series tournament in Cape Town by downing Japan 49-0 in their opener ...
Sport
2 years ago

Springbok Sevens coach Neil Powell is hoping to bottle the winning formula from the opening World Sevens Series event in Dubai for this weekend’s ...
Sport
2 years ago
Next Article