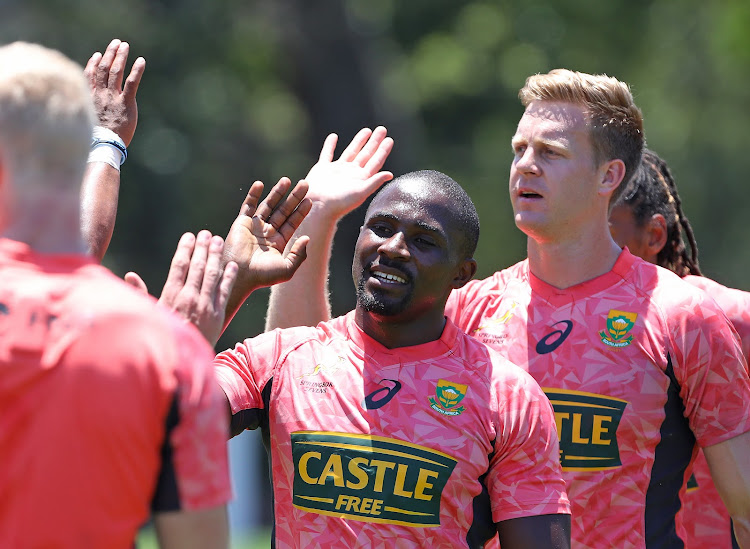 Springbok Sevens coach Neil Powell is hoping to bottle the winning formula from the opening World Sevens Series event in Dubai for this weekend’s tournament in Cape Town.

It was only natural then that his first order of business was to retain the same squad that went all the way last week for the much anticipated tournament in front of the Blitzboks home fans.

The tournament which kicks off on Friday at the Cape Town Stadium will see the hosts run out as top seeds and early pacesetters in the series.

Powell did widen his base with the inclusion of Hacjivah Dayimani before the Lions backrower was ruled out with an ankle injury‚ but now the coach has Impi Visser as back-up.

“We did bring in Hacjivah Dayimani as 13th player as we wanted to give him a feel for the World Series‚ but his ankle injury put paid to that idea‚” Powell explained.

“Impi Visser will be our official reserve this time around and I am quite comfortable having him around. He played very well for us last season and will be ready to slot in if needed.”

Powell believes the win in Dubai also served to bring the players closer.

That may serve them well deeper into the series.

“We certainly played better as the tournament progressed‚ but this weekend we start at zero again‚” Powell was keen to remind.

“The players realise that last week's performance will not mean anything this week. We are playing three very capable opponents and will have to be at our very best just to get out of our pool.

“Japan is a difficult opponent to start against and Fiji and USA were the top two teams in last year's series.”

South Africa have beaten Japan on 23 of the 24 occasions they have met in the series.

Points machine Justin Geduld is likely to pass a significant milestone in the tournament.

He needs another 22 points to become the fourth Blitzbok to pass 1000 points.

The Blitzboks kick off their campaign at 20h03 against Japan on Friday evening‚ while Fiji (13h51) and the USA (20h03) await on Saturday.

The Blitzbokke squad for the HSBC Cape Town Sevens is:

Invoking the spirit of the Rugby World Cup winning Springboks, the Blitzbokke powered their way to World Sevens Series title in Dubai on Saturday.
Sport
1 year ago

South Africa surged into the final of the Dubai leg of the World Sevens Series on Saturday.
Sport
1 year ago
Next Article