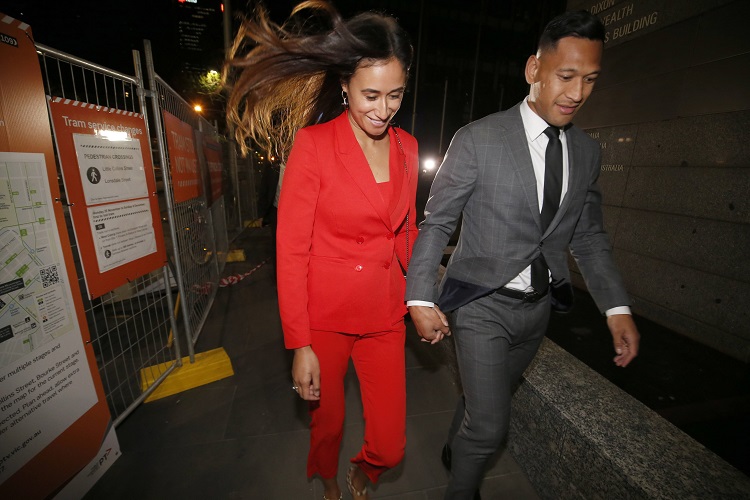 Israel Folau said Wednesday he had been "vindicated" after a surprise settlement with Rugby Australia ended the former Wallaby's divisive, multi-million dollar lawsuit over his sacking for anti-gay comments.

The governing body and Folau both apologised for "any hurt or harm" caused as they released a joint statement after two days of mediation aimed at avoiding a drawn-out and expensive court case.

Folau, an ardent Christian and former poster boy of Australian rugby, was fired in May over a social media post warning "hell awaits" gay people and others he considers sinners.

"Rugby Australia and Mr. Folau wish each other well for the future. The parties do not intend to comment further on the terms of their settlement as it is confidential," said the statement, which made no mention of Folau's playing future.

The 30-year-old former Wallabies full-back later posted a video statement online, flanked by wife Maria, in which he said he was "really pleased" with the settlement.

Sponsors would have walked if Folau not sacked: Rugby Australia

Their dispute has proved divisive, with many outraged over his comments but others, including the Christian lobby, defending the right to free speech.
News
1 year ago

"With today's acknowledgement and apology by Rugby Australia we have been vindicated and can now move on with our lives to focus on our faith and our family," said Folau in the video on his YouTube channel.

He had been set to demand Aus$14 million (US$9.5 million) in compensation, claiming he was unlawfully dismissed under legislation that bans sacking someone because of their religion.

Folau had claimed his religious freedom was at stake, winning backing from prominent conservatives and the Australian Christian Lobby, which raised more than Aus$2 million in just two days to help pay his legal fees.

The sport's governing body, which would have faced serious financial difficulties had it lost the case, argued the termination for "high-level" misconduct was purely contractual.

It came after Folau received a code of conduct warning over a similar post in 2018.

Folau was defending his actions as recently as Monday, saying in a video statement that "I only share passages from the Bible as a gesture of love".

The end of the saga will be a relief for Rugby Australia, who are beginning a post-World Cup era under new Wallabies coach Dave Rennie, a New Zealander.

Rugby star Israel Folau said his resolve to fight his sacking for homophobic comments had "only been hardened" by criticism as a crowdfunding ...
Sport
1 year ago

The joint statement acknowledged that Folau was expressing genuinely-held religious beliefs and had not meant to offend anyone with his post, which was widely condemned.

"Mr. Folau wants all Australians to know that he does not condone discrimination of any kind against any person on the grounds of their sexuality and that he shares Rugby Australia's commitment to inclusiveness and diversity," it said.

The statement added that Rugby Australia and NSW Rugby "do not in any way agree with the content" of Folau's post.

The governing body also apologised for any hurt caused to Folau and his family, while Folau said he had not intended to cause any harm to rugby.

Folau played 73 Tests for the Wallabies and was Super Rugby's record try-scorer for the NSW Waratahs before his four-year, Aus$4 million contract was terminated.

He was originally seeking Aus$10 million compensation but upped that by $4 million last week, arguing he could have one day captained Australia.

What happens next for Folau is not known.

"It is an important message from the Australian Rugby Union, who I think have dealt with it properly in the only way that they could," said Owens.
Sport
1 year ago

Australia's National Rugby League has previously said it would not welcome him back to the 13-man code he played at the start of his career.

An attempt to join Tonga's national rugby league team in September faltered amid in-fighting among officials, and Folau has recently focused on his legal battle and preaching at the Sydney church where he worships.

He sparked outrage with one sermon last month that suggested deadly bushfires raging in Australia were "God's judgement" for the legalisation of same-sex marriage and abortion.

"We started this journey on behalf off all people of faith to protect their rights of freedom of speech and religion," Folau said in his video statement Wednesday.

"We now look forward to the federal government enacting the legislation necessary to further protect and strengthen these rights for all Australians."

Corporate sponsors may shy away from any sport associated with Folau, who has become a polarising figure in Australia.

Rugby Australia said in June that key sponsors such as airline Qantas would likely have walked away from the sport if it had not taken a strong stance over his homophobic remarks.

In recent years she has vowed to boycott airline Qantas for its support of same-sex marriage.
News
1 year ago

Australia outside back Israel Folau has sparked outrage with a comment on social media suggesting that gay people would be condemned to “hell” unless ...
Sport
2 years ago

No Rugby Australia sanction for Israel Folau over anti-gay post

Rugby Australia (RA) has declined to sanction Israel Folau over his anti-gay comments last week and will instead continue a dialogue with the ...
Sport
2 years ago
Next Article