Eddie Jones: 'I got it badly wrong ... but part of me is pleased for Siya and South Africa' 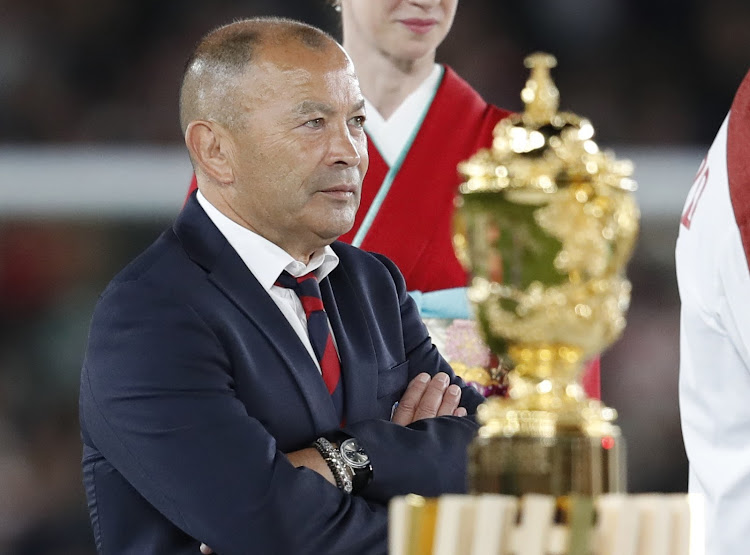 England coach Eddie Jones admits that selection errors contributed to his team’s defeat in the Rugby World Cup (RWC) final against the Springboks - but that there was some pleasure in watching Siya Kolisi lift the trophy.

Jones, in his newly published autobiography Eddie Jones, My Life and Rugby, gives a candid account of events before, during and after the final in Yokohama earlier this month.

While watching the trophy and medal ceremony after the Springboks’ 32-12 win in the final, Jones put his team’s hurt aside.

“In our misery we watch the World Cup being presented to the Springbok captain Siya Kolisi,” wrote Jones. “I’d caught some of what he said after the match over the public address system. I heard him speak of the example this victory could set his country. Here is a symbol of what can be achieved when people work together.

“South Africa’s first black captain, a young man from the townships, who had little food to eat as a boy and who had sat in a shebeen to watch our World Cup victory in 2007, now holds up the greatest prize in rugby. It’s a powerful symbol of progress for South Africa. A part of me is pleased for Siya and for South Africa. I sincerely hope it makes a difference."

But things might have been different had Jones, by his own admission, not made some selection blunders, largely around props Joe Marler and Mako Vunipola, and backs Owen Farrell, Manu Tuilagi and Henry Slade.

“I accept I made two selection mistakes for the final,” Jones wrote. “I should have chosen Joe Marler ahead of Mako [Vunipola] and I should have reverted to the Farrell-Tuilagi-Slade midfield we used against Australia. George Ford could have come off the bench when we had got into the game.

"But you never know until the game starts. You use the best available evidence and rely on your gut. I had been right against Australia and New Zealand but, as it turned out, in the biggest game of our four-year cycle, I got it badly wrong. Hindsight is a wonderful teacher," he wrote.

The Springboks, with the accent on their forward dominance, quickly knocked England out of their stride in the final. Jones described how the nightmare unfolded from early on.

“After 38 seconds we concede a penalty when Courtney Lawes tackles Frans Malherbe, South Africa’s beefy loose-head (actually tighthead) prop, and fails to roll away in time.”

“You prepare for these circumstances hoping they never occur, but this is a genuine setback. It makes our task of winning the final just so much more difficult. Dan Cole, our replacement tighthead, is 32, and he will have to play 78 minutes of a World Cup final,” wrote Jones.

He then notes how Coles’ task was made greater when considering he had to go up against Tendai Mtawarira and, later, an energised Steven Kitshoff.

The scrum was at the core of their problems wrote Jones.

“Marc dal Maso, the great French prop and my scrummaging coach with Japan, always used to say: ‘No scrum, no life.'

“Marc understood rugby. A losing scrum has a trickle-down effect. Everyone gets a bit edgy. The forwards lose confidence and the backs overcompensate and force the play.

“For some unknown reason, we are not clicking,” an exasperated Jones writes.

He also exasperated at the prospect of facing the media after the final.

“A feeling of dread fills me as I contemplate the time I will have to spend with my friends in the media. Sure as night follows day, those who threw bouquets and went completely over the top in their praise of our win over the All Blacks one short week ago will grab the pitchforks, light the torches and demand immediate answers. They will talk of ‘failure’ and rail against my selections and the game plan that didn’t work. It’s a necessary and important part of the job but, trust me, it’s exhausting.

“True to form one of them suggested later that we choked, and I snapped. I was having none of it. Our players didn’t choke. We were beaten by a better team on the night. I often wonder who marks their homework,” asked Jones, a former school teacher.

Eddie Jones – My Life and Rugby is published by Pan Macmillan at the recommended price of R330.