Frans Steyn: 'This one is special and we know the state our country is in' 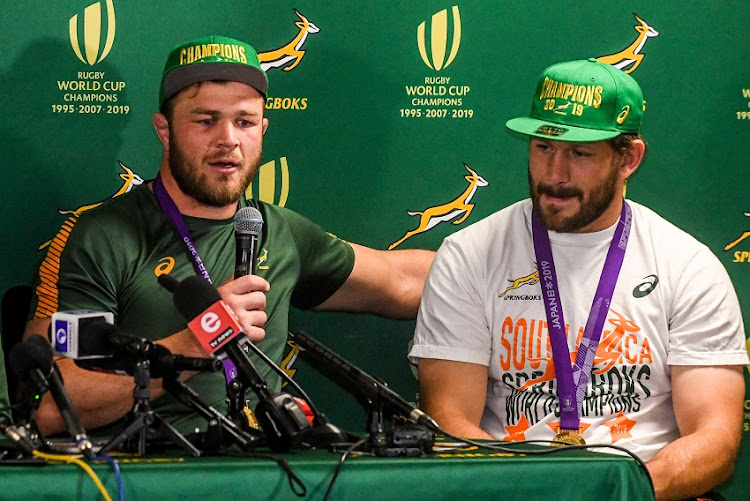 Frans Steyn experienced a heady Paris night in 2007 when he became what remains the youngest Rugby World Cup winner as a fresh-faced 19-year-old.

A dozen years on‚ and with a beard and a snapback cap that didn't exist when he was a talented tearaway with a siege-gun boot that landed long-distance penalties for fun‚ he sits with another World Cup medal.

The second one was gained in the Far East‚ Japan to be exact‚ where Steyn was utilised as a impact player for the better part of the tournament.

Steyn once admitted he's made a number of mistakes in his career before he made the World Cup squad‚ but he exuded maturity in his second World Cup coming.

He's part of a select company that has two World Cup winners medals. He's older‚ wiser and even happier.

“I think I'm a little bit older now and in 2007‚ I didn't quite realised what the triumph meant for the country‚" he said.

"As I'm older and having kids who'll have to go to school‚ you realise what it means for the country.

"I was really privileged to be part of the 2007 team and I have to thank everyone who played a part in me being in the team.

“It's a special team‚ we've all got our own stories to tell and our histories growing up.

"This one is special and we know the state our country is in. If it gives us a glimmer of hope‚ even if it's just one percent‚ then we've done our jobs.

"We went there with goals of winning the World Cup and wanting to help our country. I think we've done that and it's been awesome to have been part of both wins.”

Having won a World Cup‚ he had to have had an idea of knowing when something special was in the works.

One of the Springboks' pre-World Cup training camps took place in Bloemfontein and when he joined them‚ he felt something magical was about to take place.

“After I had a couple of weeks off‚ I joined the Springboks and I quickly realised that something special was brewing. The vibe in the squad in the first week was tremendous.

"Just seeing everybody training‚ the way we trained and the structures that were in place were absolutely brilliant‚” Steyn said.

“Just in the first week that I was there‚ I knew there was something special that was cooking.

"I really got excited and I hoped that I could make the final squad for the World Cup. I was fortunate enough to make the squad.”