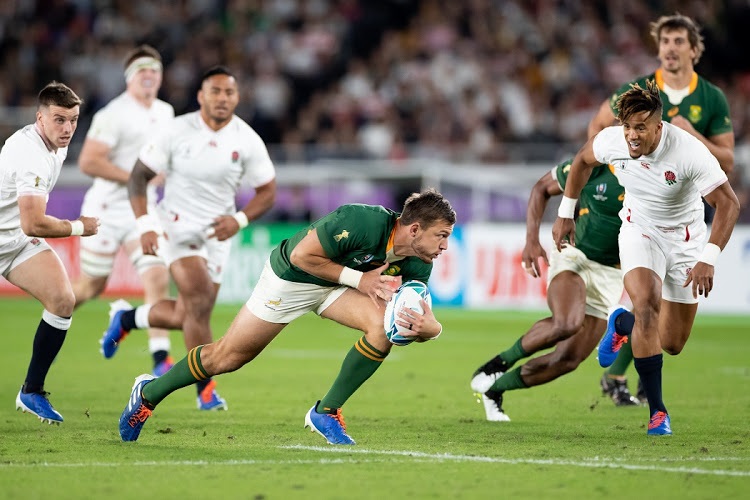 The Springboks' Handre Pollard runs with the ball during the 2019 Rugby World Cup final against England at International Stadium Yokohama in Tokyo, Japan on Saturday.
Image: Juan Jose Gasparini/Gallo Images

Through Handré Pollard's four penalties, South Africa took a 12-6 lead against England in the 2019 Rugby World Cup final in Yokohama.

South Africa enjoyed a surfeit of possession and territory and should have taken an early 3-0 lead, but Pollard missed a second-minute penalty.

Fortunately, the Boks didn't have to worry as Pollard landed a ninth-minute penalty to give SA a 3-0 lead. England responded through an Owen Farrell penalty in the 21st minute to level the scores.

South Africa take on England the final of the Rugby World Cup in Yokohama, Japan, on Saturday. Stay up to date with all the action on the field as it ...
Sport
2 years ago

The Boks also lost two key forwards in hooker Bongi Mbonambi and Lood de Jager but the Bok scrum was dominant to the point of milking two penalties that Pollard converted.

England also lost tighthead prop Kyle Sinckler to injury and his experienced replacement Dan Cole had no response to the Bok scrumming power.

This was seen on the stroke of halftime where the Boks bested the England scrum. Pollard landed the fourth kick, following the other ones in the 25th and 36th minutes to give the Boks a decisive lead while Farrell responded with a 34th-minute penalty.

The Bok defence also held up well, absorbing more than 20 phases to concede just a penalty.

It has been a decade since the Springboks have been nominated for World Rugby’s Team of the Year Award.
Sport
2 years ago

South Africans have come together and united behind the Springboks in the lead-up to their attempt to lift the Webb Ellis trophy for the third time.
Sport
2 years ago

Japan had an emperor enthroned last week, but the occasion of Siya Kolisi leading the Springboks in his 50th Test in tomorrow's Rugby World Cup final ...
Opinion
2 years ago
Next Article