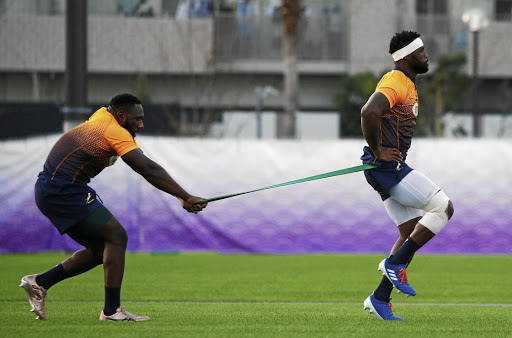 Springbok coach Rassie Erasmus has admitted that he was naive about the significance of installing Siya Kolisi as SA's first black rugby captain.

Yesterday Erasmus spoke after announcing his team, which Kolisi will lead in his 50th Test, to play England in tomorrow's Rugby World Cup final in Yokohama (11am).

The coach conceded the moment was far bigger than he thought when he made Kolisi captain for the three-Test series against England last year.

"With the initial appointment of Siya the plan was never to get the country behind us, or have another plan with Siya," Erasmus owned up.

"One day you might hear from the players how Siya was appointed captain," Erasmus said.

"Siya was actually the best-performing Super Rugby captain. That is why he became the captain of the Springboks."

The Springboks face England in the Rugby World Cup final on November 2 2019. South Africans have united behind their team as they chase their third Web Ellis Cup.

Erasmus said the captaincy was sprung on Kolisi.

"I didn't have a lot of conversations with him for that first Test when he became captain.

"Pieter-Steph [du Toit] was the captain for the Wales Test and Siya for the England Tests. It was a sudden thing and I was maybe a bit naive not thinking it would be such a massive thing.

"The whole emotional thing that went around in SA with him being the first black captain caught Siya off guard. It caught me off guard and I think his game suffered a little bit," Erasmus said.

Kolisi was eased into the training group ahead of the World Cup and is running into form at just about the right time.

"But I think the timing is great," said the coach.

"In the last two games he had great games again. We also managed his game time really well."

He may have been naive before but the weight of the occasion at Yokohama Stadium is not lost on Erasmus.

"It is his 50th Test match and I think it is fitting," said the coach.

They may be vying for the same spot in the team but Francois Louw underlined the value of Siya Kolisi to the Springbok cause on the cusp of the ...
Sport
2 years ago

Siya Kolisi has a demon of racial history to slay

There are commonalities that often weigh over black lives that make us feel like we don't matter.
Opinion
2 years ago

Springbok coach Rassie Erasmus has admitted that he was naïve about the significance of installing Siya Kolisi as South Africa first black rugby ...
Sport
2 years ago
Next Article