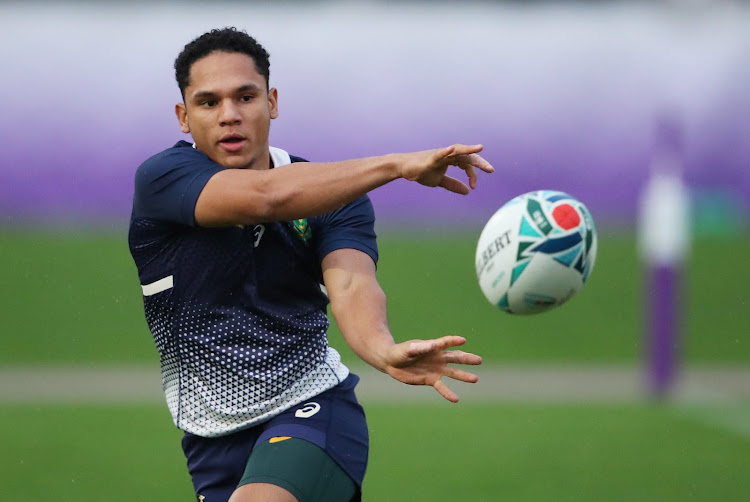 Herschel Jantjies treated a question about his World Rugby’s breakthrough player of the year nomination like he does the opposition on Wednesday.

He sidestepped and ran from it as quickly as he could.

“From an individual point of view it is obviously nice. It is a huge honour and privilege for me. But ag‚ I can’t be stuck into that too much.

"I have a Rugby World Cup final to play this weekend. That is the main priority at the moment‚” said Jantjies on Wednesday.

Jantjies was nominated along with England wing Joe Cokanasiga and France flyhalf Romain Ntamack for the prestigious award‚ which is now in its fifth year.

In their nomination‚ World Rugby said of the 23-year-old: “Few people knew anything about the diminutive scrum-half outside of the Stormers camp coming into 2019‚ but he announced himself to the world in some style‚ scoring twice on his test debut against Australia in the Rugby Championship in July and then touching down again in the 16-16 draw with New Zealand.

"The 23-year-old has featured in all but one of South Africa’s tests since‚ more often than not providing an impact off the bench.”

The winner will be named in Tokyo on Sunday at the World Rugby Awards.

Jantjies scored his fourth Test try in the 41-7 win over Japan at the beginning of September and has made nine Test appearances in all.

The only Springbok match he has missed this season was the 24-18 win over Argentina in Pretoria when he was injured.

Jantjies is likely to be named on the bench when coach Rassie Erasmus on Thursday names his team to play England in Saturday’s final.

To be eligible for the award‚ players must be in their debut season of senior international rugby.

The judging panel is made up of former internationals Jamie Heaslip‚ Felipe Contepomi and Rugby World Cup winners Fiao’o Faamausili and Bryan Habana.

The title was taken in 2018 by another South African – Aphiwe Dyantyi – with the other winners being Nehe Milner-Skudder (New Zealand) in 2015‚ England forward Maro Itoje (2016) and All Blacks winger Rieko Ioane (2017).