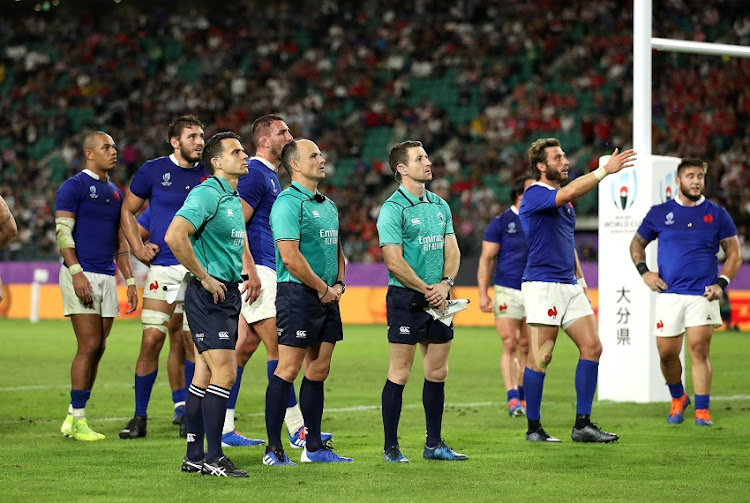 Referee Jaco Peyper and assistant referees, Nic Berry and Paul Williams look up at the big screen awaiting the decision from the TMO during the Rugby World Cup 2019 Quarter Final match between Wales and France at Oita Stadium on October 20, 2019 in Oita, Japan.
Image: Shaun Botterill/Getty Images

South Africa’s Jaco Peyper has probably blown his chances of taking charge of the Rugby World Cup final on November 2.

He was not considered for Saturday’s World Cup semifinal involving England and New Zealand in Yokohama.

The Springboks play Wales in the other semi.

“World Rugby can confirm that the match officials selection committee did not consider Jaco Peyper for selection this weekend.

"Peyper recognises that a picture of him with Wales fans‚ which appeared on social media after the Wales versus France quarter-final‚ was inappropriate and he has apologised‚” World Rugby said in a statement.

In the picture Peyper mimicked elbowing a Wales supporter. He was ‘re-enacting’ the moment that got France’s Sebastien Vahaamahina sent off in their quarterfinal against Wales in Oita on Sunday.

Vahaamahina first grabbed Aaron Wainwright around the neck before hitting him on the side of the face with his right elbow.

Initially Peyper had just punished the lock for the neck grab but a quick video review of the incident by the television match official meant it had to be escalated.

Naturally there was an outcry in France over the picture.

While Vahaamahina’s actions had been roundly condemned‚ the French were still seething that Peyper controversially awarded Wales what proved to be the match winning try on Sunday.

They believe the final transfer‚ or rip to Ross Moriarty‚ went forward before the loose forward crashed over the score.

The matter was referred to the TMO who gave the all clear.

While Peyper was stood down for this weekend he may resurface for next Friday’s third place play-off at Tokyo Stadium.

That‚ however‚ will be a distant second prize for a referee of his stature.