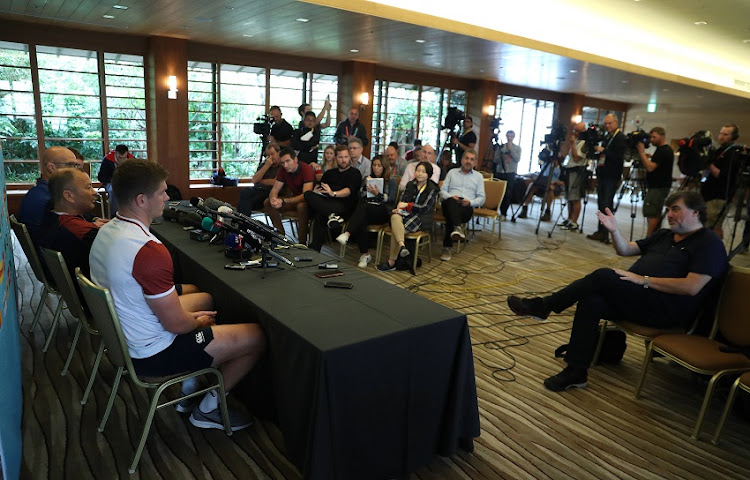 Emperor Naruhito proclaimed his enthronement in front of around 2 000 guests from home and more than 180 countries at the Imperial Palace in Tokyo on Tuesday but down the road east of the megalopolis‚ Jones held court in front of the rugby world’s media.

This time he brought intrigue to proceedings by claiming his team was spied on from on high in the build up to their Rugby World Cup semifinal clash against New Zealand on Saturday.

The garrulous Jones claims one of his team’s security staff spotted someone filming their training session on a long lens from a nearby apartment.

Jones said the training had been taking place at Arcs Urayasu Park in Tokyo.

“There was definitely someone in the apartment block filming‚" he said.

"You just don’t need to do it anymore. You can watch everyone’s training on Youtube.

"There’s absolutely no value in that anymore.”

Asked why he didn’t send security over there‚ Jones said: “Don’t care‚ mate. Don’t care. We knew from the start that they were filming and it doesn’t change anything we do.

"We have two security guards - Prince Harry’s… and the ex-Prime Minister’s. Only those two. Lovely blokes.”

He also took a swipe at the New Zealand rugby media‚ calling them “fans with keyboards”.

He rejected the notion that his team is now under pressure against opponents they haven’t beaten in seven years.

“We don't have any pressure‚ mate‚" he said.

"Put up your hand if you think we can win. There you go‚ so no one.

"No one thinks we can win. There are 120 million Japanese people out there whose second team are the All Blacks.

"So there’s no pressure on us‚ we’ve just got to have a great week‚ enjoy it‚ relax.

"Train hard and enjoy this great opportunity we’ve got‚ whereas they’ve got to be thinking about how they’re looking for their third World Cup and so that brings some pressure.”

“It’s the most exciting week of the rugby calendar because the best four teams are playing against each other.

"We get to play one of the greatest teams ever‚ that are shooting for a 'three-peat'‚ which has never been done‚ so that brings an element of pressure.