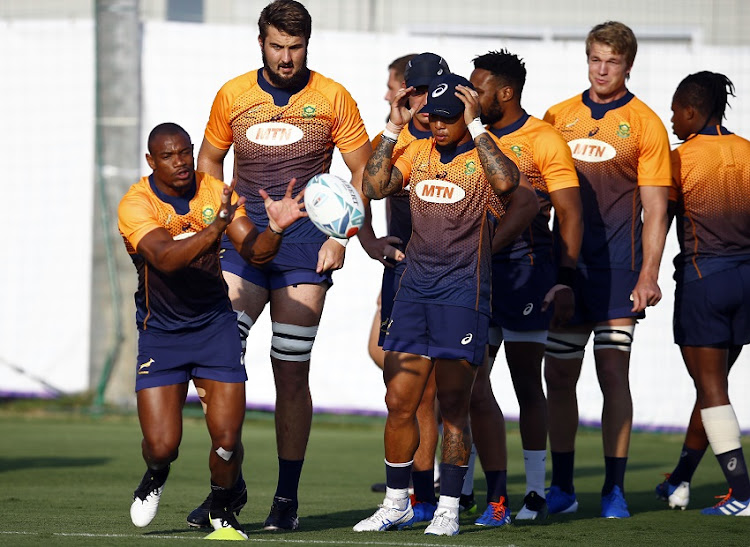 As much as he talked up Japan and how his team would have to adapt to the whirlwind rugby the hosts have made trademark‚ Springbok coach Rassie Erasmus has stuck to his guns in team selection.

He has assembled the same players that did duty against Italy‚ which is considered his best 23‚ for Sunday’s Rugby World Cup (RWC) quarterfinal against Japan.

He again went with a six/two split on the bench which‚ as was the case against Italy‚ is aimed at pummeling the opposition.

Japan‚ however are slightly different. Instead of pummeling them the Boks will try and suffocate a team that gloriously exploit space. The Springboks figure the wider the physical dimensions of the men they deploy‚ the less space there will be width wise for the hosts.

“We want to nullify space around tight forwards but we also play towards our own strengths‚” Erasmus said about his selections.

He admitted that the game will be a battle tactical wills.

Three players‚ Lood de Jager‚ Bongi Mbonambi and Tendai Mtawarira who were outside Erasmus’ first choice starting team at the start of the tournament had played their way in by the time the Boks played Italy. They return en mass.

“Bongi brings great physicality especially at scrum time‚” Erasmus said of the hooker. It also means he will be able to call on the slightly sprightlier RG Snyman‚ Malcolm Marx and Steven Kitshoff off the bench. Lung busting durability will be key.

“It may come down to who brings the greater intensity in the last 20 minutes‚” said Kitshoff.

“Who has more power in the legs to win the close games towards the end?”

Erasmus admitted that he has had difficult conversations with the players outside the match day 23. Much of that however occurred before the team left for Japan.

“We have been together for 17 weeks‚” said the coach.

“There are different ways countries plan. We have been honest. A guy like Frans (Steyn) knew he would be involved in every game but would probably not start.

"We had hard chats before we came here. It is tough on the guys who probably won’t play another game but they would want to be there when we lift the trophy. All eight‚ they are so positive.”

The coach believes his team will wear the favourites’ tag and he explained why.