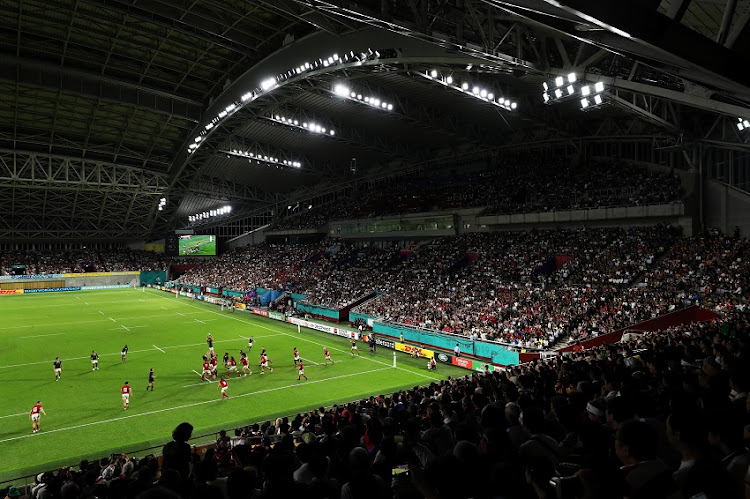 General view inside the stadium during the Rugby World Cup 2019 Group B game between South Africa and Canada at Kobe Misaki Stadium on October 08, 2019 in Kobe, Hyogo, Japan.
Image: Mike Hewitt/Getty Images

The Springboks have just about breezed into the quarterfinals of the Rugby World Cup (RWC) but super typhoon Hagibis looks set to blow the competition somewhat off course.

Hagibis rapidly developed from a tropical storm into a super typhoon in a 24-hour period and has World Rugby on notice with one official reassuringly noting “it is being monitored”.

There is reason for deep concern‚ however.

Only Atlantic hurricanes Patricia and Wilma are believed to have developed more rapidly.

It is set to hit the mainland and other parts of the Japanese archipelago over the weekend‚ if not before.

After it passed over the Pacific island of Guam it intensified with sustained winds of 250km/h while gusts of up to 305km/h were also being recorded.

As it nears Japan‚ however‚ wind speed is expected to increase while rough seas are expected to lash the southern coastline.

One news outlet described Hagibis as one of the most explosive on record.

It is currently south‚ southwest of Japan but is expected to veer to the northeast just before it reaches the mainland. That places the main island of Honshu directly in its path.

World Rugby’s tournament rules are quite clear for the pool stages of the tournament‚ and it may hold grave consequences‚ particularly for Scotland who play Japan. They need to win by a bonus point to still be in contention but may be denied that opportunity if Hagibis is still overhead.

The games most likely to be affected are on Saturday where New Zealand meet Italy in pool B‚ France play England in pool C and Ireland square up to Samoa in pool A.

Sunday’s matches involving Namibia against Canada in pool B‚ the United States against Tonga in pool C‚ Wales’s clash with Uruguay in pool D‚ and the last pool A game between Japan and Scotland are also threatened.

While a two-day window exists for knockout matches to be played should they not kick off at the scheduled time‚ in the pool stages the same luxury does not apply.

The tournament rules state: “Where a match cannot be commenced on the day in which it is scheduled‚ it shall not be postponed to the following day‚ and shall be considered cancelled. The result shall be declared a draw and teams will be allocated two match points each and no score registered (no bonus points will be awarded).”

If a match is abandoned in the first half the result shall be declared a draw but if a team has scored four tries they will get the bonus point.

If a match is abandoned after the half-time whistle the score at that point will stand as the final score.

None of this directly impacts the Springboks. They have finished their commitments in the pool stages and will be in Kobe until Sunday when they are scheduled to travel to Tokyo. Whether any travel will be permitted on the weekend is another matter.