Springboks vs Italy: Captain Siya Kolisi knows the gravity of the situation 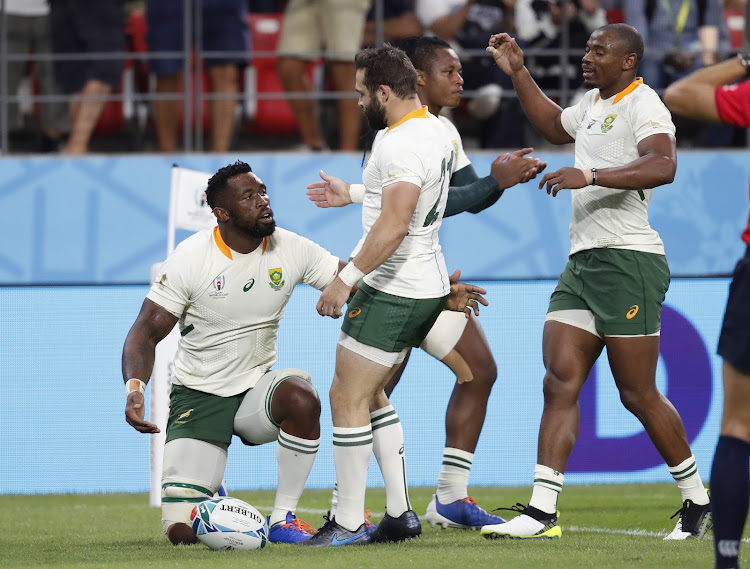 It is not so much the opposition‚ as the grave consequences defeat holds‚ that will fire the Springboks up when they clash with Italy in the Shizuoka Stadium Ecopa on Friday.

Defeat to New Zealand in their Rugby World Cup (RWC) opening game has brought them to this potential precipice but victory over Italy will bridge their path into the quarter-finals thus avoiding a deeply unpalatable scenario of being the first Bok team not to make the play-offs.

Captain Siya Kolisi knows the gravity of the situation and as was the case before their opening match against the All Blacks‚ there is not much he needs to say by way of whipping his team into a frenzy before kick-off.

“No‚ no‚ no‚” he said when asked if he needs to say much before kick-off against the Azzurri.

“It is a play-off game. We all know what we need to do. Each player knows what is needed of them. We all played to get to the RWC and now we’ve had our play-offs come much earlier.

"I don’t have to say much. I just have to pitch up and play‚” said Kolisi.

Veteran prop Tendai Mtawarira was in agreement that the weight of the occasion wasn’t lost on the players.

The tropical storms that build up steam to the southwest of Hokkaido will have nothing on what the Boks will be in for should they return home having not played in a quarter final.

? Siya Kolisi: “Every game we play is a play-off, so we’re really looking forward to it. I won’t need to say much; I just need to make sure I pitch up and play well.”

“We prepared this week as if it is a final for us on Saturday‚” Mtawarira said in his characteristic bade.

“They are going to bring their best game and so are we‚” he added.

The message from the Boks this week was that they will be ready to fight fire with fire.

They expect Italy not just to be physical but to spoil and provoke as they go along in an attempt to knock the Boks out of their stride.

“That pack is very strong that is why we have almost another entire pack on the bench‚” noted Kolisi.

“It is going to be a big set piece battle because they are also good at the scrum.

"They are very strong at the breakdown. They do different things and we need to prepare for all of them.”

As much as the Boks are haunted by their defeat to Italy in Florence in 2016‚ Italy still hurts from their 35-6 defeat to the Boks in Padua the following year‚ said Italy hooker Luca Bigi.

“I know what they are like from two years ago at Padua. We must be competitive.

"We must be determined‚ with the right attitude because we’ve been thinking about this match for four years.”

The 23 man squad for Match 3 of Pool B.
????#StrongerTogether pic.twitter.com/GE2xBNOdrQ

Bigi then put into perspective what the match means to the Azzurri.

“It has been three‚ nearly four years of working towards this match and a lot of players have been involved. Starting the match tomorrow is the prize for all my work.”

Perhaps another reason the Boks have been a little apprehensive about this match is the intimate knowledge Italy will have on them.

In Marius Goosen and Mike Catt the Italians have coaches with strong links to South Africa‚ while head coach Conor O’Shea has a good friend and ally in Brendan Venter.

“We have a few more coaching tools to use in our preparation‚ but the feeling is still the same‚” said Italy assistant coach Giampiero Di Carli.

The Boks really should not be overly concerned about Italy.

Since 1995 the Azzurri have recorded just one win over a team that competes in the Rugby Championship at the RWC.

They are going into this match with a hint of trepidation.

If‚ as they have repeated this week‚ they are not distracted by the cloud hanging over Eben Etzebeth‚ then perhaps it is the fear of failure that is nagging in the back of the head.

?? The Boks will come up against a record-breaker and a familiar face when they face @Federugby on Friday.

The Springbok team to play Italy: