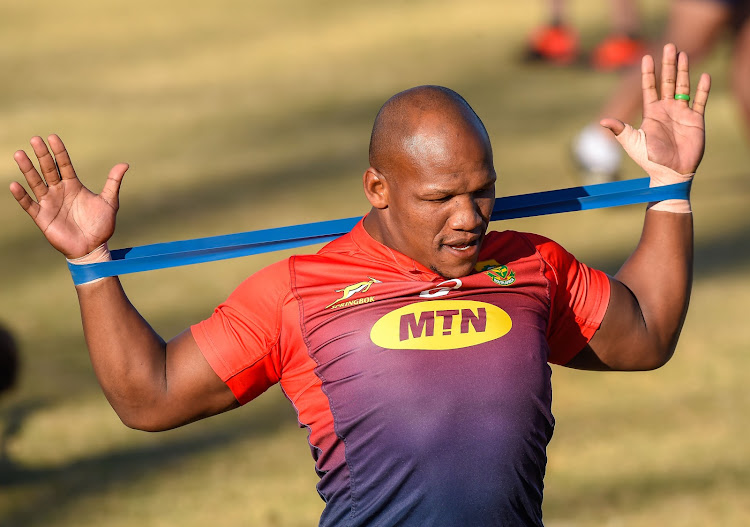 Bongi Mbonambi has been selected to start his second Rugby World Cup match in a row.
Image: Christiaan Kotze/BackpagePix

Bongi Mbonambi’s ability to consistently put in a shift has helped elevate him to the Springbok starting line-up for a do-or-die match.

On Friday the Boks play Italy in a pool B match which may have grave consequences for the losers.

Coach Rassie Erasmus has opted to play Tendai Mtawarira instead of Steven Kitshoff‚ while Lood de Jager got selected ahead of Franco Mostert.

It is the reshaped front row‚ however‚ that would have piqued interest.

Mbonambi has been a consistent performer this year‚ with his uncanny ability to routinely tick the boxes a hooker ought to.

He doesn’t quite have Malcolm Marx’s impact as a ball carrier or poacher but his all-round game is consistently at such a high level that he is now impossible to ignore.

? SPRINGBOK INJURY UPDATE: Jesse Kriel has been ruled out of the Rugby World Cup, and Damian Willemse will join the Boks in Japan on Thursday.

Moreover‚ he has forged a formidable partnership with Mtawarira and the now injured Trevor Nyakane in earlier Test matches this year.

It has helped reinforce the Boks front line and the pressure they bring to the opposition is unrelenting.

“Trevor (Nyakane)‚ Bongi and Beast have given us great performances at scrum time‚” reminded Erasmus.

“The physical challenge will be at scrum time‚ will be at mauling‚ and I think having a bench like this after Bongi‚ Beast and Frans (Malherbe) will give us some benefit in the second half.”

Having altered his first choice team that played against the All Blacks of New Zealand‚ the coach has to perform a balancing act of selecting a team fit for purpose for a particular week‚ and one that builds momentum through familiarity.

“Out of the 31 who didn’t play against the All Blacks‚ the in-form first-choice team‚ the eight players knew exactly where they stood‚ what was expected of them and when they would play as well as what must happen for them to get into the (first) team‚" he said.

VIDEO | Don't miss out on what Duane & Handre said in this exclusive interview! #StrongerTogether ?
???️ Watch it ? https://t.co/xpdETA1qMr pic.twitter.com/bOSnIPYia4

“Those boys are so positive. Whether you are part of the 31 or 23‚ we all want to win the RWC. It has been easy to manage them so far this week.

"There are one of two long faces but from the second day they are all positive because we all want to progress to the quarter-finals.

“It is not nice telling the guys they did not make the match day 23."

The changes he made may also serve to stoke a few fires.

In Marx he has a player of explosive impact‚ while Kitshoff also brings game changing attributes from the bench.